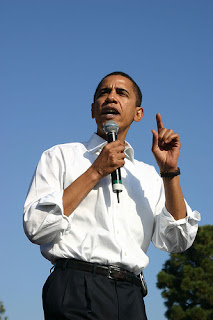 in the debates last night, Obama said he's a better manager because in the campaign he's gotten more for his money, than say Romney, who has spent $35 million of his own cash and is second to McCain who's been riding a shoestring. indeed. obama raked in $32 million in January alone, and runs a mighty organized campaign, with good results.

it was great to see that kind of debate last night, substance and no personal attacks, real mature, unlike the republican debate the other night. dare i say that obama has helped to elevate the conversation with his natural talent for bringing people together.

unity rally tonight!
Why Obama is Going to Win
Posted by Olga at 8:03 AM