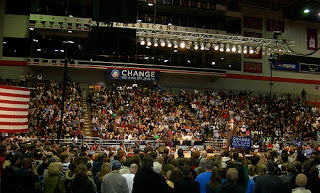 about 13,000 turn out in cincinnati; one mayor and superdelegate endorses obama and one former cleveland mayor superdelegate switches to obama

Cincinnati's only Democratic "super-delegate," Cincinnati Mayor Mark Mallory, ended months of courting by both Barack Obama and Hillary Clinton, by endorsing the Illinois senator just before he came on stage for a rally at the Fifth Third Center.

"I have decided to give my endorsement to Barack Obama,'' Mallory said, calling Obama out on to the stage where nearly 13,000 supporters created a deafening roar.

Mallory and Obama hugged on stage as the crowd stamped, hollered, and cheered, with flashbulbs popping all over. Read Mallory's statement here
Obama, as he began his speech, said he had "some business to take care of."

"Each and every one of you can go down to the Hamilton County Board of Elections - that's 824 Broadway - and vote right now,'' Obama said.

The campaign had buses parked outside Fifth-Third Arena to take people to the board of elections to take advantage of Ohio's early voting system. (The Board is open until 8 p.m. each night this week.)more

I grew up in an era of hope-not only for Black Americans but for all Americans. It occurred to me at a young age that Dr. King was speaking not just to the plight of Black Americans but to the plight of all socially dispossessed Americans regardless of race or gender. He connected the poor in Harlem to the poor in Appalachia in speech after speech and in city after city which I believe made him a great threat to those who prosper by creating division in America.

Then without warning, I watched helplessly from my parents' living room as bullets killed John Kennedy, Martin Luther King and Bobby Kennedy, felling the very leaders who called us to be agents and voices of change. With their deaths, my hope for a better America was dashed upon the rocks of despair.

Carl Stokes rekindled my hope and made me want to use the system to make a better way for those without a voice. My hope, rekindled by Mayor Stokes, lead me on my journey to City Hall-a journey that took me to Ohio State, to Cleveland City Council, to the Ohio Senate and finally to the Mayor's office. In my almost twenty-eight years of active politics, I sadly watched the political process slowly become a process, not of creating hope, but of sowing as much division as possible in order to garner status, power and control. This division robs us all of the change and progress we need as a country.

Six months ago, I supported Senator Hillary Clinton. My wife JoAnn and I are friends of the Clintons. President Clinton was only the second elected official, after the assassinations of the 1960s, to give me hope again. Not withstanding his personal transgressions, President Clinton loves America and tried to do as much for the same Americans that the Kennedys and Dr. King were concerned about. But, after watching the primary election process by the day and sometimes by the hour, I decided that I cannot cast my vote for Senator Clinton.

On March 4th, I'm voting for Barack Obama because I want real change in our America, and he's made me hopeful that he has the intestinal fortitude to make the change which our country so sorely needs.

As an African-American, I am proud to see Barack Obama make such an extraordinary effort to become the President of the United States. But being Black is not enough for me to vote against my friend. I am voting for Barack because he has rekindled my hope again through his experience, vision and leadership for change in a political system that has gone so awry.

Our America is in great peril and great change is needed. Whether it's the economy, our current stance in the world, a lack of health care for our citizens, the education of our children, the creation of hopelessness in our inner cities, or re-knitting the fabric of the American family, we face unparalleled challenges. If we are to be a better America that once again offers its children hope, we cannot continue down the same path of public discourse and execution. We must have a President who has the courage to challenge the status-quo and stir our inner imagination of what could be. It's that inner imagination of what can be that has made us a great nation.

Yes, Senator Obama gives me great hope, but hope is not enough when you're voting for a presidential candidate. I believe Barack Obama has the experience, ability, courage and vision to translate his call for change into a new direction for America just as other great Presidents have in the past. He is no less qualified or able than any other candidate, and the fact that he's poised to become the Democratic nominee for President is testimony to the good judgment and need for change desired by so many Americans.

On March 4th I'm casting my ballot for Barack Obama to be the Democratic nominee for President of the United States. I believe in my heart and soul that Senator Obama can and will bring us together as a nation, rekindling our hope and calling upon us all to be a part of the change we wish to see.

I'm sure that next Tuesday John, Bobby and Martin will be looking down upon us in Ohio and wondering if hope is still alive. Make them proud...Yes we can!