Threats of McCain and the Republicans 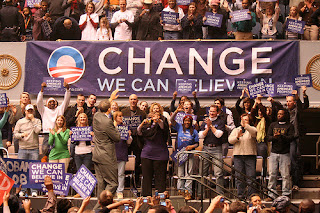 they're out there now, plotting and scheming in dark holes, howling in the night. mwahahahaha!
everyone is saying best beware, obama is going to get his, the republicans are going to peel the bark off him (as one lame radio host suggested), uncover his dark side, gnaw him to the bone. that republicans right this very second have all got their thinking caps on and they're coming up with 100 wicked ways to stew barack obama.
but you know what.
i think obama has the wits to come out on top and unscathed.
he has plenty supporters who believe in him, numbers of which are snowballing. yeah, republican types would call me naive. whatever. it does me no good to sit here and ponder all the evil and ignorance that's out there (even though i do. it's rather fascinating).
another thing, we're smarter now. we know a "swift boat" attack.
so i say launch your dark attacks. it will get you nowhere. we're all sick of it. really, we are. the pettiness, the sick and twisted diversions.
that's why we're supporting obama.
just for fun, now, here's a guy who clearly doesn't get it. but he's thought long and hard about how to defeat obama, even checking in with karl rove:

How, then, can McCain tackle Obama? He can attack Obama's "change" message.

Master political strategist Karl Rove spoke to the American Jewish University this week.
He stated that the key to attacking opponents isn't to attack their strengths -- it's to attack weaknesses they perceive as strengths. In 2004, Democratic nominee John Kerry staked his campaign on his perceived strength: his military experience. But, as Rove explained, that wasn't his strength -- he was vulnerable on foreign policy, a candidate with a record of attacking the military. By pointing out Kerry's weakness on the military, the Bush campaign was able to completely undercut Kerry.

Obama perceives his greatest strength to be his "change" message. He never shuts up about "change." His website touts his candidacy as "Change We Can Believe In." "We will change this country, and change the world," he states. His speeches are studded with the word "change." In his January 26 speech after the South Carolina primary, he used the word "change" 12 times. In his February 9 speech to Virginia's Jefferson-Jackson Dinner, he used it eight times. In his February 12 speech following the Potomac primaries, he used it 11 times. In his Wisconsin primary victory speech on February 19, he used it 33 times.

For the love of God, somebody buy this man a thesaurus.

While Obama believes he can win the presidency simply by uttering the word "change" like a magical incantation, his "change" message has a soft underbelly. His focus on change means he despises this country the way it is. His wife, Michelle, is crystal clear on this.

"Our souls are broken in this nation," she said this month at UCLA. "That is why I am here, because Barack Obama is the only person in this race who understands that. That before we can work on the problems, we have to fix our souls." She went further in a February 18 speech in Wisconsin: "For the first time in my adult lifetime, I am really proud of my country, and not just because Barack has done well, but because I think people are hungry for change."

Despite all of its problems, America is not a deeply flawed place. It is the greatest nation in the history of mankind. It allows Barack Obama to run for president; it allows his wife to attend Princeton University and Harvard Law School. The Obamas' constant emphasis on change carries the disturbing undertone that the country is a disaster requiring radical reform. This isn't a message of optimism -- it's a message of profound pessimism.

McCain can defeat Obama simply by pointing out the obvious connotations of Obama's "change" message. He can powerfully cite the fact that he was tortured for the best country on the face of the earth -- he's always been proud of his country.

And, McCain should say, his country deserves the pride of its citizens. Sure, some policies need change -- some policies always need change. But the soul of the country is intact. It doesn't need a soul-fixer. It needs a leader.

and for more fun, here's karl rove himself speculating and stuff

and here's fun with blogs.