see the up to date superdelegate tally and add-ons in my sidebar. 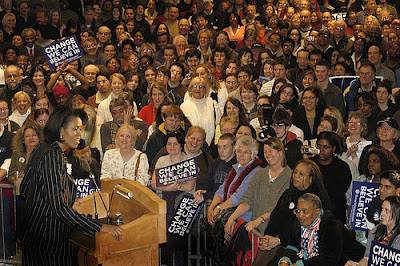 Democratic National Committee Member (and superdelegate)Leon Lynch endorsed Barack Obama, citing his ability to lead the American people in the right direction and his record of making change that matters for working families.

306 superdelegates are "undecided." i believe they will vote the will of the people.
obama has nearly 1 million more in popular vote, the absolute number of people who voted.
obama has won 11 contests (including democrats abroad)

Problem is, looking at the numbers, Clinton has to win both of them big. Obama has a lead of 150 elected or "pledged" delegates, according to NBC's calculation (The Washington Post uses a different formula to count). Clinton needs to win 58 percent of all remaining pledged delegates simply to get her lead back, NBC political director Chuck Todd notes. But that's hypothetical. The reality is worse.

If Obama wins the remaining states he's favored in, such as Vermont, Mississippi, North Carolina and Oregon, then Clinton will need to win 65 percent of the vote in places such as Ohio, Texas and Pennsylvania, Todd said.

Most observers are beginning to focus on the numbers of elected, or pledged, delegates because they've concluded that those are almost sure to be the only ones who will matter -- unless Clinton can persuade the superdelegates at the nominating convention to overrule the voters and destroy the Democratic Party once and for all.

By the way, Obama holds a lead of nearly 1 million votes -- that's 1 million-- in the popular vote, according to the Web site Real Clear Politics. Of course, that doesn't really count -- ask Al Gore-- but it's worth noting. If you throw in Florida and even Michigan -- where his name wasn't on the ballot -- Obama still leads by 300,000 votes.

The Democratic superdelegates are starting to follow the voters — straight to Barack Obama.In just the past two weeks, more than two dozen of them have climbed aboard his presidential campaign, according to a survey by The Associated Press. At the same time, Hillary Rodham Clinton's are beginning to jump ship, abandoning her for Obama or deciding they now are undecided.

The result: He's narrowing her once-commanding lead among these "superdelegates," the Democratic office holders and party officials who automatically attend the national convention and can vote for whomever they choose.

As Obama has reeled off 11 straight primary victories, some of the superdelegates are having second — or third — thoughts about their public commitments. more

what are presidential qualities?
Roosevelt was called inexperienced Historians for Obama