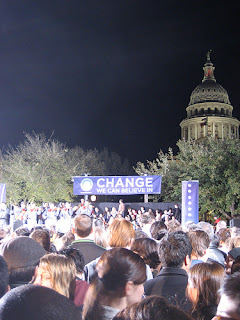 "we're into personism." great quote. i like texas!
here it is in context:

NYT: Texas is no stranger to powerful women, which is why it was scarcely accidental that in Thursday night’s debate, both Senators Hillary Rodham Clinton and Barack Obama bowed to such trailblazers as former Representative Barbara Jordan and former Gov. Ann Richards.

“While all those redneck bubba cowboys were driving the cattle, the women were running the ranches,” said Terri Burke, a longtime Abilene newspaper editor who was recently named executive director of the American Civil Liberties Union of Texas.

As Texas prepares to deliver a giant and perhaps decisive verdict on March 4 on the two closely matched Democratic presidential contenders, women — who traditionally outnumber men at the polls in this state and around the nation — may well hold the key to victory. And while many women champion Mrs. Clinton’s bid for the White House as the obvious next leap across the gender gap, others say her historic candidacy no longer carries the same urgency as it would have, say, for their mothers’ generation.

“We’re beyond feminism,” said Kathy DeLange, 64, a retired school psychologist, who wore her heart on her head — an Obama cap — as she arrived at the polls here on Tuesday for the first day of early primary voting. “We’re into personism now.” read more.

for more on what's happening in texas, go to burntorangereport.com