James Frey is Back

The author humiliated by Oprah on live TV for fabricating parts of his book "A Million Little Pieces" is back on his blog. More than the humiliation and scandal, Frey wrote two darned good books. I hope he's recovering.
Posted by Olga at 4:25 PM

What's wrong with healthcare? This paragraph in a NYT story yesterday is right on:

Under the current medical system, doctors, nurses, lab technicians and hospital executives are not actually paid to come up with the right diagnosis. They are paid to perform tests and to do surgery and to dispense drugs.

American Idol beat the Olympics on Tuesday night in terms of viewership. Like it or not, one thing you can say about the TV show is that there is a lot of unmined talent out there. They've been sleeping on couches and playing in nightclubs all around the country.

Another thing, America seems to be getting more sophisticated in terms of pop music. They seem to be less interested in the svelte Britney Spears type. Look at the past winners and runners up of the contest, Ruben Studdard, Fantasia and Clay Aiken. They break the pop singer mold.

Look at some of the talent this year, Taylor Hicks, Elliott Yamin and Chris Daughtry. 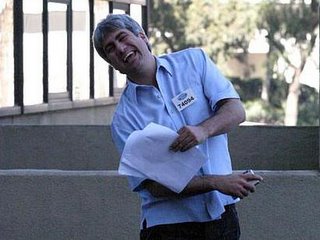 Taylor has his own band and self-produced CD. He's been playing out for years.
But the music industry, generally speaking, seems oblivious to the emerging artists out there. Drew Danburry, one of my favorites -- and hard working -- ought to have a record contract. He ought to be making a decent living. He's produced his own records. He tours in a beat up car. He plays skateboard parks, parking lots, sidewalks, clubs. He has a strong fan base, whom he text messages and sends out regular email updates. He's also brilliant as a musician and performer. 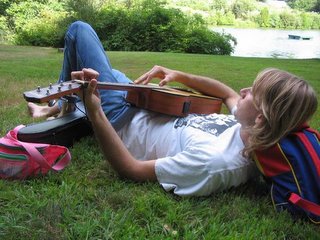 The music industry ought to be spending more time out on the town, paying attention to the buzz, sales on independent music sites such as CD Baby. The American music lover wants unique and original.
Posted by Olga at 3:26 PM

The Chilis may tour with Kanye West. Woo HOO! That makes this a John Frusciante Day! 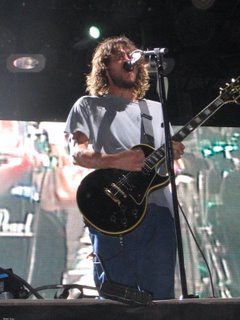 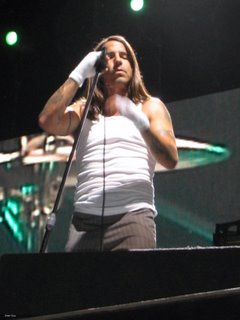 "It's not for you, it's for the baby," Kennedy said to Godinez, spearing a piece of banana with her long fondue fork. The women relaxed on overstuffed pink couches and chairs as they cooed over ultrasound photos, baby socks and gourmet chocolate.

Scenes like this are precisely what McLean, Va.-based Mars Inc. had in mind when it launched the Ethel's chain in Chicago last spring. Mars -- best known as the maker of M&Ms and Snickers -- bills Ethel's as a "place to chocolate and chitchat."

Chocolate cafes or lounges are sprouting up all over the country, presenting themselves as a sweet and cozy alternative to coffee shops and bars.

All are expected to see increased business on Tuesday, boasting an intimate, but approachable, spot to celebrate Valentine's Day. Americans spend about $750 million on chocolate around the holiday each year, said Susan Fussell, spokesman for the National Confectioners Association.

Trend-watching firm Datamonitor called chocolate "the new coffee" in a list of top 10 trends to watch in 2006, and confectionary industry watchers confirm that chocolate cafes are taking hold.

"For women it's like candles and a bubble bath," said Joan Steuer, president of Chocolate Marketing, a Los Angeles-based industry trendspotter. "The whole concept of a place to go and just be with your chocolate and celebrate the experience of chocolate is ... wonderful."

Down the street from the Ethel's on Armitage Avenue is a Vosges Haut-Chocolat Boutique. Chicago-based Vosges has two locations in the city and one each in New York and Las Vegas.

Unlike traditional retail chocolate outlets, chocolate cafes and lounges are more than just candy counters. Chocolate lounges, with their comfy couches and an atmosphere that encourages patrons to linger, feel more like coffeehouses than candy stores.

The company opened its first cafes in 1996. "I think it's going to become a national trend," Tarner said.

Chocolaholics used to paying less than a dollar a day to feed their habit may balk at the idea of paying $1.50 for a single bite-sized piece of Ethel's chocolate, but analysts say that's changing over time.

"If there's one trend that's all-encompassing, it's trading up," Steuer said. "We all want the best that money can buy."

Ethel's pitch is specializing in what it calls "approachable gourmet chocolate," offering 50 different chocolates in five collections with all-natural and as authentic-as-possible ingredients. The Chocolapolitan in the cocktail collection contains real vodka, and the PB&J in American pop is filled with real peanut butter and jelly.

Menu offerings like Chocolates and Cocoa for Two cost $18 and include two hot cocoas and 10 pieces of chocolate of the customers' choice. A box of 48 chocolates is $42.

Truffles and Tea for Two -- a sampling of all 11 truffle varieties -- and Fondue for Two -- a hot pot of chocolate dipping sauce and fruit, pretzels, pound cake and graham crackers -- both cost $15 and are among the most popular items, Haugh said.

And while Ethel's, with its pink and chocolate brown decor, clearly is targeted to women, it attracts its share of male customers, too.

"I hear they have a really good fondue, so we're here to have a chocolately good lunch," said Archie Reyes, eating with friends, both male and female, at the Armitage Avenue location.

"I'm like a girl when it comes to chocolate."

One of the most fabulous authors out there, Kate has a new book: The Miraculous Journey of Edward Tulane. She writes books for children that are great reads for adults.
Here's the rundown on Kate's books and an interview with Kate, who lives in Minneapolis.
Posted by Olga at 11:30 AM