of course not.
for weeks magazines and newspapers salivated over this one -- dani california and petty's mary jane's last dance had similarities.

i didn't bother to write about it because it was plain ridiculous and i didn't want to fuel the fire. the chilis wouldn't maliciously lift music and tom petty never seemed like the kind of guy that would sue. in fact, i don't think petty ever considered suing and i don't think the peppers were much worried. it was merely an example of how the media uses controversy -- true or made up -- to sell stories.

here it is in writing:

Thursday, June 29, 2006
Red Hot Chili Peppers not in trouble with Tom Petty
The Red Hot Chili Peppers can breathe a little easier. Tom Petty told Rolling Stone in an interview that hit newsstands on Wednesday, June 28th, that he has no intentions of pursuing legal action over the similarities between the Chili Peppers' current single, "Dani California," and his own 1993 hit, "Mary Jane's Last Dance." When asked if he'd heard the song, Petty replied, "Yes, I have. Everyone everywhere is stopping me. The truth is, I seriously doubt that there is any negative intent there. And a lot of rock 'n' roll songs sound alike." Petty added that the Strokes admitted to lifting from his "American Girl" for their hit "Last Nite."

As for legal options, Petty said, "If someone took my song note for note and stole it maliciously, then maybe. But I don't believe in lawsuits much. I think there are enough frivolous lawsuits in this country without people fighting over pop songs."

Earlier this month, the New York Post reported that Petty had been made aware of the controversy and was "looking into legal ramifications."

While not discussing "Dani California" directly, Chili Peppers bassist Flea said recently that lifting ideas from other artists is nothing new: "Of course, we rip off people all the time. I mean, no good artist doesn't. I mean, that's what art is for, to rip each other off. It's what you rip off and how you interpret what you rip off and in what context you rip it off."

from youtube:
a silly, fun video about moving to Cali with big dreams! 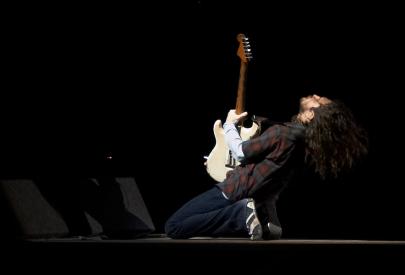 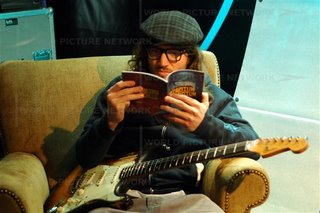 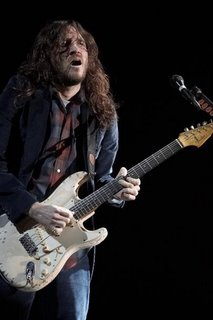 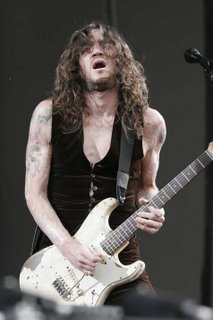 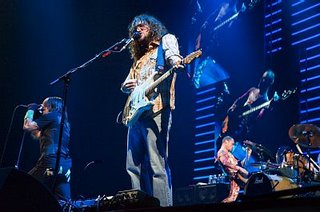 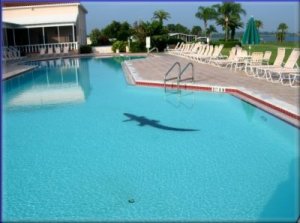 this gator was found swimming in the pool at a retirement community in winter haven florida. looks to be a very large gator at that! 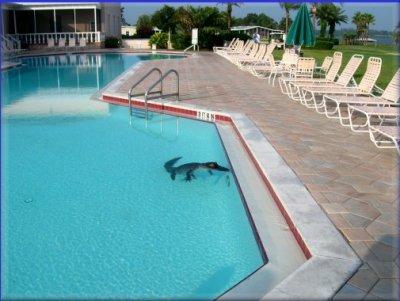 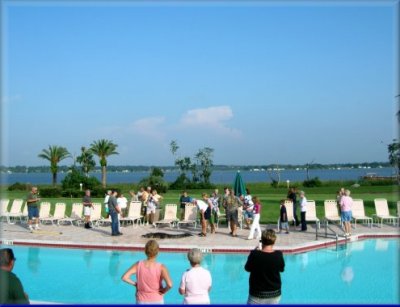 it's funny until somebody gets hurt :-)here he is getting removed. i've been told he's been safely sent back to the swamps.
Posted by Olga at 2:38 PM

the stardust, one of the last old-time vegas hotels is going the way of the dunes and the sands to make room for a new property. 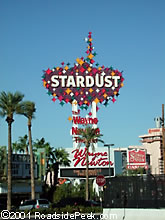 a so-so story in the times calendar section. photo's cool, though
tell me baby
john sings sunday bloody sunday (thanks rhcp fan club). it's one of the greatest songs ever but john steals it.
don't forget me
for emily

enlightened readers of details. wow, heartening. from the AP:

When Esquire asked men who they'd invite from a list of 14 notable women to a dinner party, they chose Secretary of State Condoleezza Rice — over such stars as Julia Roberts, Jennifer Aniston and Jessica Simpson.

Rice was followed by Oprah Winfrey and Angelina Jolie in a national survey published in the magazine's July issue. The 29-question survey, conducted by Beta Research Corp., polled 1,083 men aged 25 and older.

The president did, however, place first in another category: least admirable man in America. He got 14.8 percent of the vote, while Clinton came in second — again — at 7.8 percent.

According to the survey, most men do not aspire to be "American Idol" winner Taylor Hicks. Eighty-five percent said they'd rather be the CEO of a Fortune 500 company than win the Fox talent contest (15 percent).

for me, hands down, my dinner choice, musician john frusciante. i'd love to pick bill gates' brains on wealth, saving the world, philanthropy. oprah tops the list of women, author kate dicamillo. hmmmmm
Posted by Olga at 5:26 PM

"Japanese women see value in youth and want to combine childishness and cuteness with sexiness and glamour," says Sakae Nonomura, a researcher with the cosmetics company Kanebo. "Cute has now grown so widespread that various types of cute coexist."

Indeed, Japanese have come up with nuances of cute such as "erotic-cute" and "grotesque-cute," and use such phrases in everyday conversations.

Thirty-eight-year-old garbage collector Hideki Kojima is such a believer in cute he patronizes a "maid cafe," one of several that have sprung up in Tokyo, where waitresses don maid outfits and greet customers by squeaking: "Welcome home, master."

Sometimes Kojima goes three times a day to the cafe, which serves food and allows customers to take photos and play games with the maids, drops as much as $90 a visit for a chance to gawk at the maids.

"They're cute," Kojima says with conviction. "It can't really be explained in words."

Nobuyoshi Kurita, sociology professor at Musashi University in Tokyo, says cute is a "magic term" that encompasses everything that's acceptable and desirable — this nation's answer to the West.

Kurita thinks it's important to watch Japan's youngsters, who see the bustling streets of downtown Tokyo — where the cute aesthetic is born — as the center of their universe.

"Where cute goes determines the future of Japan," he said, adding that Japan's cute offerings may one day command the respect of luxury goods from Europe. "If it succeeds, Japan's future will be bright. If it doesn't, then Japan may disappear."

yay!!!!!!!!!!!!!!!!!!
josh klinghoffer is working on the drum tracks in prep for john's next solo record, according to frusciante.net. yayayayayayayayYIPPEE! 17 tracks already written... geez.

john also is going to be on the mars volta (touring with the chili peppers) next album called Amputechture.

and.... he's also supposedly working on ataxia's follow up to "automatic writing." ataxia -- josh, of the bicycle thief, and joe lally of fugazi -- was just one of john's remarkable collaborations in the past few years. 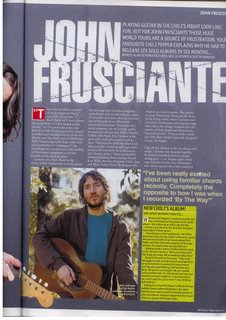 his stint with ataxia and his solo work was completely ignored in the rolling stone's recent innocuous cover story about the chili peppers but i guess that's the way it's got to be when they're promoting their current record. as good as stadium arcadium is, i can't wait for john's next record. john's reportedly studying classical music so who knows what we're in for but you know it's going to be good.

frusciante.net is a gold mine. here are some of john's paintings 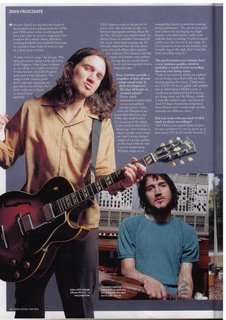 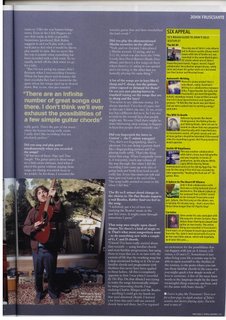 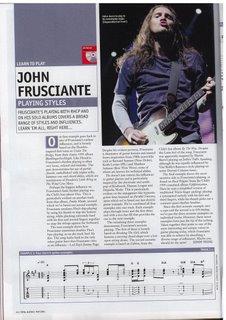 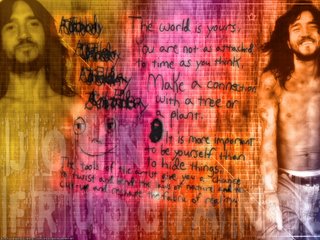 i had to pass this along because it was done so well -- not by me but by the creator of invisible-movement. visit her site. she has lots more to share.
Posted by Olga at 8:29 PM

i ran across this humbling essay by john scalzi. here's part of it. read the rest here:

Being poor is relying on people who don't give a damn about you.

Being poor is an overnight shift under florescent lights.

Being poor is finding the letter your mom wrote to your dad, begging him for the child support.

Being poor is a bathtub you have to empty into the toilet.

Being poor is stopping the car to take a lamp from a stranger's trash.

Being poor is making lunch for your kid when a cockroach skitters over the bread, and you looking over to see if your kid saw.

Being poor is believing a GED actually makes a goddamned difference.

visit wahineskate.com for photos
Posted by Olga at 9:54 PM

arrgh. when will women learn they can't do it all? men can't either, of course, but they've never had to.
here's news anchor elizabeth vargas' response to the feminist uproar (she willingly stepped down as anchor to focus on parenting. feminists say she was pushed):

...As for a woman having it all, well, Vargas is the first to admit that it is hard "to be a good parent and a good employee."

Particularly when you're enduring a tough pregnancy. Vargas, who turns 44 in September, says she's had way more problems this time around than she did with Zachary, now 3.

"I feel horrible. I have debilitating nausea every day, and fatigue. I've been very honest with them [management] about the difficulties... . I didn't think it was fair to give this job less than 150 percent."

Vargas says she and her husband, songwriter Marc Cohen ("Walkin' in Memphis"), have a C-section scheduled for mid-August. She plans maternity leave of nine to 12 weeks.

Vargas understands why some feminist groups are making a call to arms, but there's no war to be fought in this case, she insists. "The answers in this case are different than their concerns."

"Elizabeth is making the choice. That's what the liberation of all women means... . In my mind, they're fighting a battle with an unwilling soldier." 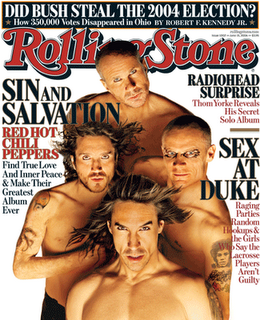