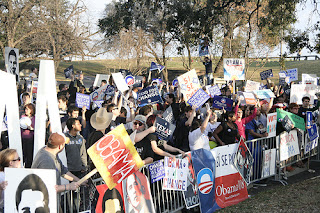 from time magazine:Every successful politician needs a home base, a place to go where the crowds are always friendly and the pizza is always free. For Hillary Clinton, that place of comfort in Ohio is Kamm's Corners, a neighborhood on Cleveland's west side dominated by white firefighters, cops and factory workers. One of Clinton's strongest supporters here, Pat Dorr, has driven a Buick with an "I love Hillary" bumper sticker since the mid-1990s.

Dorr became active in the Clinton campaign last week, after a national campaign staffer asked her to make phone calls. "When I first came in, there was nobody here," says Dorr, 78, who has helped so many campaigns over the years that she's lost count. "This whole week, this office was basically empty."

Home base for Barack Obama lies on the opposite side of town, in the Lee-Harvard neighborhood, home to mostly working-class African-American families. One of Obama's first volunteers here was Antoinette McCall, a substitute high school teacher who has never worked a campaign before in her life. McCall became active 11 months ago, donating what little money she could to Obama's campaign. She used Obama's website to recruit volunteers and run a phone bank from her living room. She convinced friends who own beauty salons to organize their customers, and created a database of hundreds of Obama supporters.

"It's like we had this whole movement built up before the campaign staff even got here," says McCall, 36. In a few months, McCall, a political novice, has built an organization rivaling that of some state senators who form the backbone of Clinton's establishment support. "By the time they finally opened the office," she says, "this place was packed."

As the Democratic candidates for President prepare for their debate at Cleveland State University Tuesday night, grassroots Obama supporters like McCall are the key to his having a chance on March 4 of continuing his stunning streak of 11 straight primary or caucus victories — and all but locking up the Democratic nomination. While the blue-collar Buckeye State has been viewed as part of Clinton's firewall strategy for stopping Obama's momentum, the truth is that even though she is still leading in polls, her campaign is playing catch-up when it comes to the all-important job of grassroots organizing. "I'm 52, I've been around for a while, and [Obama's] is the most spontaneous, energetic political operation that I've ever seen," said Keith Wilkowski, a lawyer and former Democratic Party chair in Toledo.

That level of energy was apparent at a Monday rally of several thousand people in Cincinnati. Obama opened his remarks by telling the crowd that early voting is already under way in Ohio and urged them to go vote immediately after the rally ended. He even told them the location where they could go cast their ballots. It was candidate-as-precinct-captain, and it showed both the intensity of the fight for votes going on daily as well as the benefits of having a candidate who used to be a community organizer and has run a voter registration drive.

Obama's successful recruitment of outsiders was born of necessity — Clinton enjoys endorsements from Ohio's popular governor and many Democratic officeholders. If she retains her (albeit shrinking) lead in the polls, it will mean that a traditional, top-down campaign rooted in the party establishment still can win in the clutch. But if Obama scores an upset, it could prove that a new breed of grassroots campaign — viral, internet-based, built from the ground up by neophytes like Antoinette McCall — is finally ready for prime time.

"Clinton doesn't have as many volunteers as Obama right now," says Steve Fought, a longtime grassroots organizer for the Ohio Democratic Party who works as an aide to Congresswoman Marcy Kaptor of Toledo. "But she has deep party support, and I suppose they'll get their machine cranked up." more