The Youth Vote Goes to.... Obama

"In South Carolina, Obama drew more under-30 votes than all Republican candidates combined, according to exit polls." 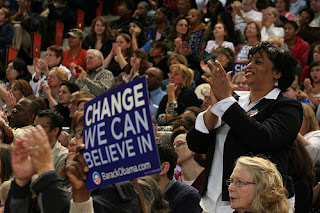 But there's something about an 18-year-old that can't abide careful hedging and cautious steps. The Senator's daughter Maddie Esposito had seen the way her mother teared up whenever she heard Obama speak. And now it was happening again as mother and daughter sat side by side on the family-room sofa in a suburb of St. Louis, watching the results of the Iowa caucuses on TV. "You know you believe in him," Maddie admonished her damp-eyed mother. "It's time to step up." The next morning, Maddie, a college freshman home for the holidays, added a threat: "You have to do it, or I'm never talking to you again."

McCaskill endorsed Obama — a big boost in an important Super Tuesday primary state. And the story of that endorsement is the Democratic-nomination battle etched in miniature. Kids like Maddie Esposito are the muscle of Obama's army. His campaign has become the first in decades — maybe in history — to be carried so far on the backs of the young. His crushing margin of victory in Iowa came almost entirely from voters under 25 years old, and as the race moved to New Hampshire and Nevada, their votes helped him stay competitive. In South Carolina on Saturday, Jan. 26, Obama's better than 3-to-1 advantage among under-30 voters more than neutralized Clinton's narrower edge among over-65s. Now, as the candidates shift to the coast-to-coast, Dixie-to-Dakota battlefield of Feb. 5, Obama is counting on a wave of Democrats experiencing their own McCaskill moments, roused to his banner by the fervent — if sometimes vague — urgings of youth.