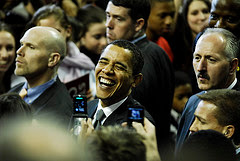 university of washington professor david domke and his students have been covering the election as part of class. what have they learned? that the obama camp, in contrast to the clinton camp, went out of its way.
this is another thing that makes the obama campaign what it is: access.
i think access will also be a key part of the obama presidential administration.

Because the Obama campaign treated us like pros — they called us back within minutes, set up interviews, got us press passes, went out of their way to make the campaign accessible. The Clinton campaign, in contrast, didn’t return a single phone call, didn’t provide press access, and did virtually nothing to encourage our coverage. It was either arrogance or disorganization on the Clinton campaign’s part.

read the rest here. it offers some examples.
Obama’s speeches
Upcoming primary and caucus schedule
Historians for Obama
what are presidential qualities?
Roosevelt was called inexperienced
Posted by Olga at 12:46 PM