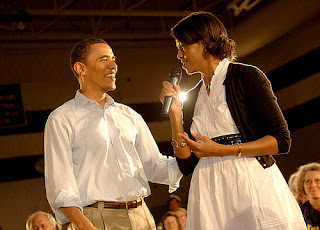 big spread in newsweek on michelle obama.
some excerpts:

She isn't the traditional Stepford booster, smiling vacantly at her husband and sticking to a script of carefully vetted blandishments. Nor is she a surrogate campaign manager, ordering the staff around and micromanaging the candidate's every move.

"Somehow I've been caricatured as this emasculating wife," she tells NEWSWEEK. "Barack and I laugh about that. It's just sort of, like, do you think anyone could emasculate Barack Obama? Really now."

Those who know her invariably describe Michelle as poised, relaxed and confident. "There is no difference between the public Michelle and the private Michelle," says University of Chicago law professor David Strauss, who sits with her on the board of the University of Chicago's Lab School. (The Obamas' daughters attend the school.) "There's no pretense."

What would she do as First Lady? It's a question she gets all the time now. Yet it's not one she ventures to answer in any detail. She is interested in issues women face balancing work and home, and in lowering barriers that keep poor students from college. "There are a ton of things. It's endless what you can do in the White House," she says. "But until I get there and know what kind of resources I'll have and how much time and what's the agenda of the country, I think, truthfully, I don't know which of these many things I can focus on."

Michelle Obama was never much interested in calling attention to herself. As an undergrad at Princeton in the 1980s, she was interested in social change, but didn't run for student government. Instead, she spent her free time running a literacy program for kids from the local neighborhoods. At Harvard Law, she took part in demonstrations demanding more minority students and professors. Yet unlike another more prominent Harvard Law student who would later take up the cause, she was not one to hold forth with high-flown oratory about the need for diversity. "When [Barack Obama] spoke, people got quiet and listened," recalls Prof. Randall Kennedy. "Michelle had a more modest, quieter, lower profile." Barack won election as president of the Law Review. Michelle put her energy into a less glamorous pursuit: recruiting black undergrads to Harvard Law from other schools. For her, politics wasn't so much about being inspirational as it was being practical—about getting something specific done, says Charles Ogletree, one of her professors. "She was not trying to get ahead."

She no longer has the luxury of keeping a low profile. Now a very public figure, Michelle has accepted the role of aspiring First Lady and the sometimes uncomfortable scrutiny that comes with it. On the campaign trail, she is sometimes slated as the opening act, introducing Barack to the audience. Direct and plain-spoken, with an edgy sense of humor uncommon in a political spouse, she complements her husband's more grandiose style. She can be tough, and even a little steely, an attitude that stems, at least in part, from wanting to live up to the high expectations her father set for her. She wants to change the world, but she also wants to win this thing now that they're so deeply invested. If his loftiness can set him apart from the crowd, her bluntness draws them in. Standing up before large audiences wasn't easy at first. "I've never participated at this level in any of his campaigns," she told NEWSWEEK last week. "I have usually chosen to just appear when necessary."

From the beginning of the campaign, Michelle made it clear to her husband that she would give the effort her all ("We need to be in there now, while we're still fresh and open and fearless and bold," she told Vanity Fair last December), but not at the expense of family life. At two meetings with the candidate and his political aides shortly before he announced his intention to run, she grilled them about particulars, practical concerns that had nothing to do with his sweeping themes of "hope" and "change." What demands would the campaign place on their lives? Where would the money come from? Could they really take on the Clinton machine and win, or was this just an extended ego trip? "She didn't want Barack to launch some kind of empty effort here," says senior strategist David Axelrod.

Michelle also raised concerns about her husband's safety. It was one of the first questions her own family had asked her when she first aired the possibility of running. He would soon be assigned Secret Service protection very early in the campaign, in response to the huge crowds he was drawing and threatening e-mails. Michelle, who now has a security team of her own, does not like to discuss the possibility of Barack's getting hurt. "We are grateful the Secret Service is a part of it," she told NEWSWEEK last summer. "I'm probably more grateful than Barack, who loves to live a very normal life. This is the first sign that our lives aren't normal." newsweek