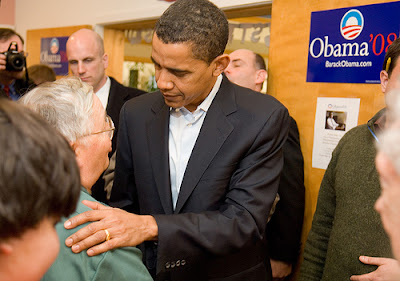 
latest polls for all the states: real clear politics.


Caucus turnout has never exceeded 5,000 but party officials believe that figure could double tonight and could reach as high as 12,000. Local volunteers for U.S. Sen. Barack Obama of Illinois are suggesting that turnout could even climb into the 15,000 to 18,000 range, which would likely overwhelm party volunteers conducting the presidential preference poll.

salon: Obama is favored to win the Wisconsin primary on Tuesday, but when it came to embracing the state's blue-collar Ya Hey culture, he finished dead last. John McCain spoke at a Friday night fish fry. Hillary Clinton held a town hall meeting in a bratwurst-and-beer joint. Mike Huckabee went bowling. Obama -- who is trying to attract Milwaukee professionals and Madison progressives who find those images hokey -- rallied his supporters at the Midwest Airlines Center, a convention hall that also hosted an auto parts trade show that morning.
The senator could at least have hired Dick Blaha, Milwaukee's Polka Ambassador, as his DJ. Instead, he took the stage to U2's "City of Blinding Lights." But he did call out a special Milwaukeean.
"Some of you may know I have a friend who has a talk show," he said. "She has a funny name: Oprah Winfrey. Her mom lives in Milwaukee, and she is here today."
That was Vernita Lee, who moved her family from Mississippi when Oprah was 6, and took a job in a hospital kitchen. Thanks to her daughter's success, Lee now lives in a high-rise condo. But in his speech, Obama addressed himself to those people who are still struggling.
Obama markets himself as the candidate of hope, but he made the deepest connection with his audience when he spoke to their fears -- fear of losing their jobs, of getting sick without healthcare, of failing to pay the mortgage. At a speech last week in Madison, Obama praised Wisconsin as the birthplace of the progressive movement. In Milwaukee, he pressed on with the message that government has a duty to help the needy. That's bound to be well received in a city that's elected three Socialist mayors, and a state that elected Russ Feingold, the current avatar of Upper Midwestern good-government liberalism. (Feingold, curiously, has not made an endorsement.)
"The American people are struggling right now," he boomed.
"A-men!" came a shout from in front of the bleachers. read more.

what are presidential qualities?
Roosevelt was called inexperienced. Historians for Obama
Posted by Olga at 7:41 AM