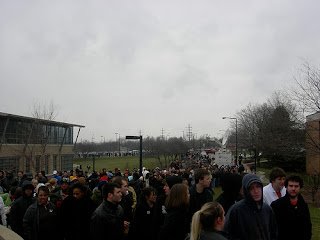 lines for the youngstown rally.

samantha power is an adviser to obama:

salon: In light of all the questioning of Obama's "experience," you've said he has dirt under his fingernails, and that he would bring a new America to the world. How would he do that?

Samantha: The idea that he doesn't have experience is nuts to me. He's a constitutional law professor. I happen to miss the Constitution; I thought it was a good document. That's a huge component of being a president when you're combating terrorism and you're trying to restore American values.

The fact that he used to work in the inner city, that's the dirt under his fingernails. If people are an abstraction to you, it's going to show. If you're living with people, if you're working in the inner city, you see the human stakes of it all. He's also lived abroad, so he's comfortable crossing boundaries.

here is the story and Q&A from salon.com
Getting through these dark times
Foreign policy whiz Samantha Power sheds light on a legendary diplomat killed in Iraq, advising Barack Obama and how America can emerge from the Bush era.
By Leigh Flayton

Feb. 18, 2008 In 2003, Samantha Power won a Pulitzer Prize for her book "A Problem From Hell: America and the Age of Genocide," in which she chronicled the United States' responses to the major genocides of the 20th century. But that's just one of her accomplishments. Power, 37, is a Harvard professor and founder of that university's Carr Center for Human Rights Policy. She is a prominent voice on stopping the genocide in Darfur, Sudan, and addressing numerous trouble spots around the world. She has shot hoops with fellow Darfur activist George Clooney, and once proclaimed herself the "genocide chick."

Beneath her sense of humor is a fierce idealism and dedication to improving world affairs. Now, Power is immersed in what she considers the toughest challenge yet in her action-packed career: serving as a senior foreign policy advisor to Democratic presidential candidate Barack Obama.

The demands of that job have only risen since she first began working for Obama when he joined the U.S. Senate in 2005. But Power also found time to produce another book, published last week: "Chasing the Flame: Sergio Vieira de Mello and the Fight to Save the World." The new volume is a biography of the revered United Nations envoy -- once described as a cross between Bobby Kennedy and James Bond -- who was killed in the catastrophic bombing of U.N. headquarters in Baghdad by insurgents during the early stages of the U.S. occupation of Iraq. The book is also a treatise on why the world needs the U.N., and the lessons Vieira de Mello learned throughout his career, now more than ever.

"He is the man for dark times," Power says of Vieira de Mello, whom former U.N. Secretary-General Kofi Annan once called the U.N.'s "go-to guy." "He had a 35-year head start thinking about how to mend broken people and broken places, these questions that are consuming us now." the rest at salon.com.

this from harvard crimson, 2005: obama met power through a powerful friend.

Power and Obama—both graduates of Harvard Law School—were introduced to one another by Peter W. Galbraith, a former ambassador to Croatia and the son of Warburg Professor of Economics emeritus John Kenneth Galbraith.

Power said that, during their first dinner together earlier this year, Obama made a powerful impact on her.

“[I had] never been so impressed with somebody in public life as I was with him,” she said. “I got the sense in talking to him that he wanted to see what we could do together” on a variety of foreign policy fronts.

Obama, the junior Senator from Illinois, was elected last November after he defeated Republican candidate Alan L. Keyes ’72 by more than 40 percent of the vote. Obama is perhaps best known for giving the keynote address at the 2004 Democratic National Convention.

A spokesman for Obama said that the senator was “very excited to have [Power]...be a member of the team.”

what are presidential qualities?
Roosevelt was called inexperienced.