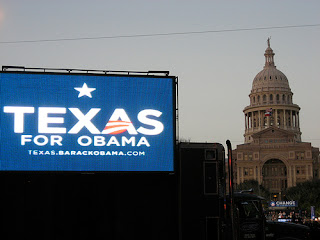 hillary clinton's lead in superdelegates pledged to her has shrunk:

Mrs. Clinton is trailing in pledged delegates won thus far. She has won fewer states than Mr. Obama, and fewer total votes cast in those states. Though she leads among superdelegates, five weeks ago she had pledges from 71 percent of all superdelegates announced for either her or Mr. Obama, but that share has slipped to 57 percent.

as you probably already know, superdelegates could decide the winner if neither candidate gets enough pledged delegates (that's you and me voting). but it seems that the superdelegates, who can vote for whomever they want, will do the right thing and go with the will of the people.
according to this delegate tracker: obama now has 182 and clinton has 241. the 296 that are left are either staying mum or haven't decided.
obama adds two more superdelegates today: john lewis and marianne stevens

in delegates, obama has 1,188 and clinton 1,033
superdelegates explained.
Obama’s speeches

what are presidential qualities?
Roosevelt was called inexperienced

Historians for Obama
Posted by Olga at 11:21 AM