Obama to Improve Mexico US Relations 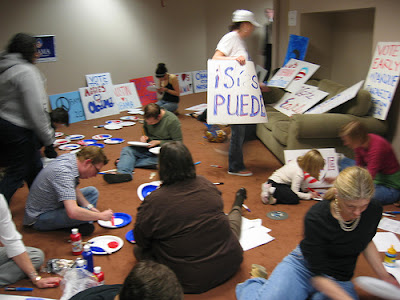 Barack Obama:
Under George W. Bush, the United States has not lived up to its historic role as a leader in the Western Hemisphere. As president, I will restore that leadership by working to advance the common prosperity and security of all of the people of the Americas. That work must begin with a renewed strategic partnership with Mexico.

Mr. Bush took office vowing to make the Americas a top priority. But over the last seven years, the administration's approach to this issue has been clumsy, disinterested and, above all, distracted by the war in Iraq. Indeed, relations have not fully recovered since Mexico refused to fall in line with President Bush's rush to war.

Mexico's President Felipe Calderon just traveled across the United States but didn't even go to Washington, which isn't that surprising given how little Mr. Bush has done to improve relations.

Starting my first year in office, I will convene annual meetings with Mr. Calderon and the prime minister of Canada. Unlike similar summits under President Bush, these will be conducted with a level of transparency that represents the close ties among our three countries. We will seek the active and open involvement of citizens, labor, the private sector and non-governmental organizations in setting the agenda and making progress.

With our neighbors to the south, that agenda must include securing our border. The hard work of comprehensive immigration reform must be done at home; we will be a nation of laws and immigrants. But we also have to work with Mexico to crack down on both illegal immigration and transnational criminal organizations that threaten people on both sides of the border.

This will take new investments and new partnerships. Here's some of what we need to do:

•Invest in anti-drug education on both sides of the border to reduce demand for illicit narcotics.

•Make a concerted effort to disrupt arms smuggling and money laundering from the United States that supplies Mexican drug cartels with weapons and funds.

•Partner with Mexico to enhance the professionalism of its law enforcement and judiciary officials.

It's also time to develop a bilateral strategy for lifting up our border communities. Six and a half million Americans live in cities and towns next to the border, and 61 million Americans live in the four states that border Mexico. Too often we neglect the unique needs of these communities, which are integrated with their sister cities across the border. As president, I will work with state and local governments to enhance cross-border partnerships in transportation, law enforcement, environmental protection, health care and water usage. more at dallas news.
Posted by Olga at 8:51 PM