The Right Time for Obama 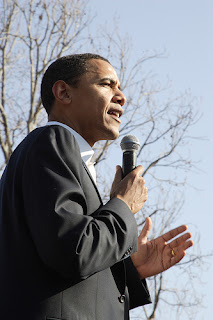 obama often speaks about how now is the time and he is the candidate of change. here are some chunks from a story in the atlantic, which tell why he matters at this point in time:

We may in fact have finally found that bridge to the 21st century that Bill Clinton told us about. Its name is Obama.

If you are an American who yearns to finally get beyond the symbolic battles of the Boomer generation and face today’s actual problems, Obama may be your man.

The next president has to create a sophisticated and supple blend of soft and hard power to isolate the enemy, to fight where necessary, but also to create an ideological template that works to the West’s advantage over the long haul. There is simply no other candidate with the potential of Obama to do this. Which is where his face comes in.

The other obvious advantage that Obama has in facing the world and our enemies is his record on the Iraq War. He is the only major candidate to have clearly opposed it from the start. Whoever is in office in January 2009 will be tasked with redeploying forces in and out of Iraq, negotiating with neighboring states, engaging America’s estranged allies, tamping down regional violence. Obama’s interlocutors in Iraq and the Middle East would know that he never had suspicious motives toward Iraq, has no interest in occupying it indefinitely, and foresaw more clearly than most Americans the baleful consequences of long-term occupation.

Here again, Obama, by virtue of generation and accident, bridges this deepening divide. He was brought up in a nonreligious home and converted to Christianity as an adult. But—critically—he is not born-again. His faith—at once real and measured, hot and cool—lives at the center of the American religious experience. It is a modern, intellectual Christianity. “I didn’t have an epiphany,” he explained to me. “What I really did was to take a set of values and ideals that were first instilled in me from my mother, who was, as I have called her in my book, the last of the secular humanists—you know, belief in kindness and empathy and discipline, responsibility—those kinds of values. And I found in the Church a vessel or a repository for those values and a way to connect those values to a larger community and a belief in God and a belief in redemption and mercy and justice … I guess the point is, it continues to be both a spiritual, but also intellectual, journey for me, this issue of faith.”