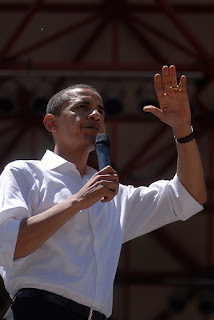 which candidate has done a better job running their campaign, including raising money and getting more people involved? sen. barack obama.
more than 450,000 people have donated to the obama campaign since the beginning of the year and he's gotten more results for the money. why is this important? because it says what kind of leader he will be.
here is recent financing information for obama and clinton. new financing reports are due feb. 20.
time

obama's donor breakdown by %, actual number and dollar amount
how obama is spending the money
top contributors google, goldman sachs, university of california and harvard university are some of obama's top contributors
clinton's top contributors goldman sachs, morgan stanley, microsoft, and emily's list (a group that elects pro-female candidates)
how clinton is spending the money
obama's contributions by geography
clinton's contributions by geography
look up by donor, zip code, state and candidate.
what does this tell you?
clinton gets $764,000 from lobbyists. casinos, banks, healthcare and HMOs, hedge funds, insurance, lawyers, oil and gas, pharmaceuticals, real estate, securities and investments, telephone, tv/nusic/movies, tobacco, computers sectors like clinton better than obama in terms of donations
obama gets $87,000 from lobbyists.
obama leads in two categories: education, retired donors.
Posted by Olga at 8:41 AM