Obama: Change From the Bottom Up 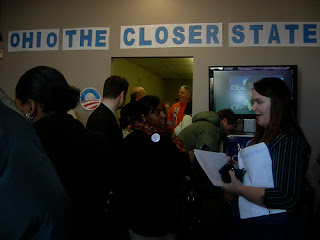 this story puts clinton's campaign to rest. even i'm not that optimistic.

here's a really upbeat story that i only hope is true.
it speculates that obama's campaign truly is a movement by the people and that the nation is ready for change. i am.
after 7 years under bush it has felt like wading in sticky tar. who in the world did he represent?
under obama's leadership it will feel like an exhale, a sunday stroll. no more of this war mongering. no more stodgy white guys making really bad decisions. no more secret vice presidents. a chance in the direction of peace. no more formaldahyde trailers for people whose lives were devastated by Katrina. no more referring to other countries as "the axis of evil." no more slurred speech, misspoken words. no more feeding the wealthy and taking from the poor.
we can only hope. obama's right. hope is a great thing because first you have to envision something more before you can actually do something about it.

Barack Obama is wearing a wristband in memory of a soldier killed in Iraq, given to him by a mother who said she wants the Democratic presidential candidate to keep others from dying.

Tracy Jopek of Merrill, Wis., gave Obama the bracelet at a rally Friday night in Green Bay, and Obama was still wearing it Saturday as he campaigned across the state before Tuesday's primary.

"She gave me this wristband, which I'm very grateful for," Obama told the Green Bay audience, halting and lowering his voice from his normally upbeat presentation. "I meet mothers and family members all over the country who are still mourning their children but are also thinking about the young men and women who are still over there and wondering when it will end."

Obama has not made a point of showing it to reporters or others on the campaign trail. A campaign staffer described it as black metal band with silver lettering.