Palin Never on Meet the Press 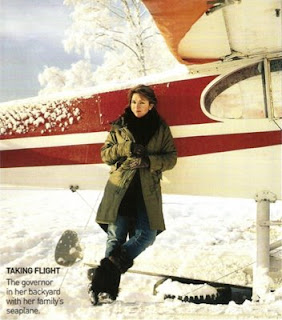 She poses for Vogue 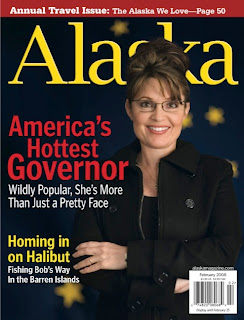 But she made the cover of Alaska for being hot and she likes moose burgers and her nickname was Sarah Barracuda. Maureen Dowd puts her lovely snarky twist on the Palin story. She also explains the meaning behind each of her kids' eclectic names: Trig, Bristol, Willow, Track, Piper.

Americans, suspicious that the Obamas have benefited from affirmative action without being properly grateful, and skeptical that Michelle really likes “The Brady Bunch” and “The Dick Van Dyke Show,” reject the 47-year-old black contender as too uppity and untested.

Instead, they embrace 72-year-old John McCain and 44-year-old Sarah Palin, whose average age is 58, a mere two years older than the average age of the Obama-Biden ticket. Enthusiastic Republicans don’t see the choice of Palin as affirmative action, despite her thin résumé and gaping absence of foreign policy knowledge, because they expect Republicans to put an underqualified “babe,” as Rush Limbaugh calls her, on the ticket. They have a tradition of nominating fun, bantamweight cheerleaders from the West, like the previous Miss Congeniality types Dan Quayle and W., and then letting them learn on the job. So they crash into the globe a few times while they’re learning to drive, what’s the big deal?

Obama may have been president of The Harvard Law Review, but Palin graduated from the University of Idaho with a minor in poli-sci and worked briefly as a TV sports reporter. And she was tougher on the basketball court than the ethereal Obama, earning the nickname “Sarah Barracuda.”

The legacy of Geraldine Ferraro was supposed to be that no one would ever go on a blind date with history again. But that crazy maverick and gambler McCain does it, and conservatives and evangelicals rally around him in admiration of his refreshingly cynical choice of Sarah, an evangelical Protestant and anti-abortion crusader who became a hero when she decided to have her baby, who has Down syndrome, and when she urged schools to debate creationism as well as that stuffy old evolution thing.

Check out Palin's resume.
How Palin is polling.
Posted by Olga at 9:50 PM