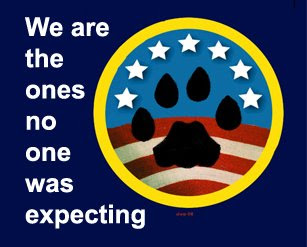 Go Hillary! Go PUMAs!
Here are the roll call details. Whatever. This strikes me as nitwitty, on the verge of lunacy. It's nothing but symbolic. At this point, we should just nominate Hillary and spare Obama. I don't think America is ready for enlightened leadership yet. I'm having a bad day.

CNN: But on a Wednesday morning conference call with reporters, campaign officials said that a joint statement from the Obama and Clinton campaigns laying out the roll call process had been sent to state delegation chairs Tuesday night.

Vote tally sheets have been given to the state chairs, who will distribute them to the members of their delegations. They are reviewing them at state delegation breakfasts in Denver this morning.

From about 5 to 7 p.m. ET – 3 to 5 p.m. MT – the official party roll call will take place. First, a speaker will nominate Clinton, then another will nominate Obama. Two people will second Clinton’s nomination, and three will do the same for Obama. The office of the Democratic National Committee’s secretary will collect the tally sheets, and roughly half an hour of speeches will be followed by a state roll call. After its completion, each candidate’s total will be announced by the state chairs.