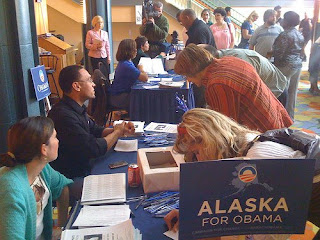 The Democratic nominee spoke to Palin for several minutes this afternoon from his campaign bus. According to senior campaign aide Robert Gibbs, Obama told Palin she would be a terrific candidate and that he looked forward to seeing her on the campaign trail. "He also wished her good luck, but not too much luck," Gibbs said.

The Obama camp is probably delighted. She had better bring her fur and her rifle and moose burgers to the vice presidential debate.
Posted by Olga at 4:22 PM