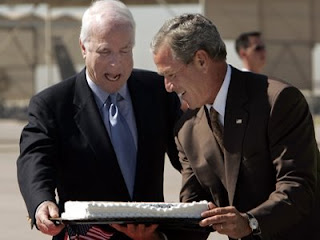 Maybe McCain should put up some of the evacuees in one of his 7 houses. Do you think he's trying too hard to separate himself from 2005, when Katrina hit and he and Bush were having cake, celebrating McCain's birthday? See the timeline. Read all about it.

Their trip comes just as delegates are preparing for the Republican National Convention, which begins Monday.

Aides say McCain and his wife Cindy will join Palin in traveling to Jackson, Miss., Sunday at the invitation of Mississippi Gov. Haley Barbour because of concerns about people threatened by the storm, which was heading into the Gulf of Mexico and menacing the same area ravaged by Hurricane Katrina three years ago. The storm could hit the United States as early as Monday afternoon.

The McCains and Palin will receive a briefing at the Mississippi Emergency Management Agency — a permanent operations center monitoring hurricane response.

Republicans are worried about holding their national convention during the storm.