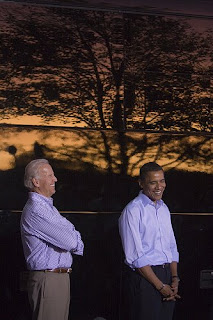 Obama and Biden in Dublin Ohio
Note: Obama and Biden will be on 60 Minutes tonight.
Here's some of what Obama and Biden talked about. They seem very comfortable together.
You gotta love Joe. He's such a relater. Obama-Biden are the perfect combo. Brilliant judgement on Obama's part. Unlike the other candidate in this election.
Biden says there are big differences between he and Sarah Palin.
For one, she's good looking, he said.
Someone from the audience says "You are gorgeous." Biden walks out to the audience and asks her to repeat it again for his wife. Then he walks over to Obama.
"Hanging around with this young good looking guy," he kids Obama.
Obama must be quietly laughing.
Then he attacks McCain on jobs.
Here's a good line: "As Barack likes to say Made in the USA."
The middle class built America. Our responsibility is to rebuild the middle class.
Joe is very effective.
Obama up
He says: "Holy Toledo." He's being silly.
Obama says people are worried. He talks about the similarities between McCain and Bush.
That's why they're holding their convention in the Twin Cities. You can't tell them apart. "That's Hillary Clinton's line but it's a good one," he says.
Bush and Cheney, by the way, got their pass out of the convention -- Gustav. They can't get it wrong this time.

It strikes me that the biggest difference between Obama and McCain, is McCain could give a flip about middle class issues like education and healthcare.
"McCain's new vp seems like a very engaging person, a nice person," Obama says. Then he rails on McCain's opposition to equal pay for equal work for women.
On restoring America's standing in the world, we need to renew partnerships and alliances. Obama is referring to leadership a lot more often -- good. Obama is a leader. That's his strength and it's what we need. George Bush is the epitome of a poor leader and illustrates what happens when someone with zero leadership qualities is president.
Question on trade: He believes in free trade but there has to be reciprocity.
China is a huge competitor and they should be treated as such.

Biden steps in. Look at the Olympics. China is investing 10% of gross domestic product in new infrastructure. Why is a company going to stay in Toledo, where the roads and bridges are falling apart.

An audience member asks: How to stress to cynical people that they need to get out and vote.

Obama: If you think you're better off, then don't vote or vote for John.

If you think we're in a defining moment in history, then vote Obama. It is your obligation to get out and vote.

Biden: There's nothing like a hanging to focus one's attention. Go Joe.

Obama and Biden look comfortable together.

Question: Someone asks for specifics on education funding. We're going to change No Child Left Behind. Federal government will give you more support -- money and best practices -- in return for creative programs and professional development.
Biden: When another country out-teaches you they will out-compete you. John McCain is supporting $100 billion in tax cuts for people who make $1.4 million a year, he said. Don't tell me what you value. Show me your budget and I'll tell you what you value.
Obama adds: We're going to stop millions in Iraq and start spending it here.
Keith from Toledoans for Obama: How do we rebuild our cities?
I'm holding the greatest book on rebuilding cities, he says. Obama knows the book. Obama says you can't have a good suburb without a good city.
Here's the video