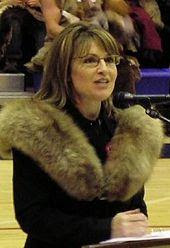 Listening to McCain's Ohio event this morning, Sarah Palin was audibly nervous and spoke little of her own experience (she has little) and instead cheered for McCain and pandered to Hillary.

The way she spoke was cheerleader-ish in content and tone (maybe it's just her high-pitched voice). As a woman, what an insult. What an insult to think that women just want a woman in high office. She has to be qualified. She has to be even more qualified, given that McCain hammered Obama on experience. The audacity.

The choice shows McCain lacks judgment in choosing a vice president, someone to take over in case he gets sick or otherwise, who's lacking. Alaskans say: it's like one of your friends was chosen for one of the highest offices in the nation. They're shocked.

Alaska? I could run Alaska.

She has five children, so she obviously doesn't believe in birth control. I admire her not aborting her baby with down syndrome but she's not a special case. I'd argue most women wouldn't have an abortion if they were carrying a downs syndrome baby. But even still, that does not make a vice president or a president. Abortion is not the single most important issue to this nation, contrary to what conservatives preach.

She's also accused of using her power to benefit her sister, in the middle of a custody battle.

She's against putting the polar bears on the endangered list. It would hurt oil business, she said. She doesn't believe the ice is melting, contrary to scientific evidence. She wants to drill in the Arctic National Wildlife Refuge. I'm so sick of oil.

Let's not forget she was Miss Alaska runner up.

She likes to hunt and fish and eat moose burgers. She was called Sarah Barracuda. Who cares.

McCain chose Palin purely for politics. He did NOT choose someone to help him govern. This was an effort to shock, gain attention, sway a few Appalachian women voters (PUMAs). He's out of touch, no doubt.