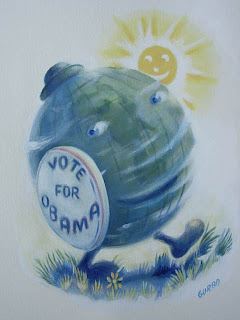 painting by Walter Gurbo
The Obama camp is predicting 130 million or more to vote in November (there are 304 million people in the U.S.)
Obama's counsel Bob Bauer is staking out the strategy.

Ambinder: Barack Obama's campaign predicts that as many as -- if not more than -- 130,000,000 voters will go to the polls this November, by far a record. The man in charge of making sure it all goes smoothly, Bob Bauer, is decidedly calm about the massive endeavor he is coordinating.

At a lunch for election lawyers, corporate and union counsels and a few nerdy reporters this afternoon, Mr. Bauer, Obama's general counsel, outlined the campaign's integrated election protection effort, the largest ever in the party's history.