It's the Electoral Map not the Polls 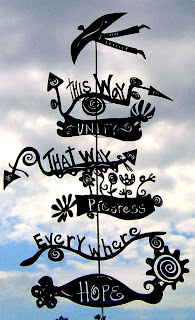 One of the pieces on display at Manifest Hope art gallery at the Denver Convention.

The Obama campaign ran a brilliant strategy during the primaries. They knew it was all about amassing as many delegates as possible, in small states as much as big states, because they understood the delegate system.

Hillary's campaign ran a traditional big-state strategy and many of her supporters just didn't understand the delegate math, which is why I think, many of them have the impression that Obama stole the election. Had the best way to win been winning big states, the Obama camp would've mapped out that strategy but that wasn't the key to winning.

Now the Obama camp is all about the electoral map, not the day to day polling. They understand that the voting electorate has changed, and they are putting a high priority on registering voters and turning out their base.

Swamp: David Plouffe, one of the architects of Obama's surprise rise to the top of his party, suggests that he all but ignores the national polls. As Don Frederick, our colleague at Top of the Ticket relays the press briefing that Plouffe held, Obama's manager said:

What they do pay attention to: The 270 electoral votes needed to win the White House, a calculation that focuses instead on the 50-state contest, and, in the places where Obama shows the most potential for winning, the work of the campaign to spur a strong turnout of Obama voters.

Right now, the electoral map favors Obama.
Posted by Olga at 8:13 AM