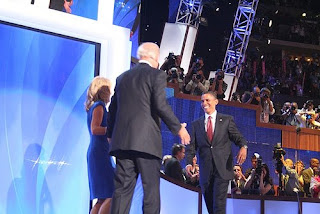 Obama made the greatest pick in Joe Biden. Obama is a big thinker, wise, a leader. For some that's scary and the republicans used it against Obama: Look at that scary smart man, that's all he is, was the message. But Biden has the ability to translate scary smarts into emotion for an easier connection.

American Prospect: Biden spoke of his family, but unlike Obama, he did not enlarge them into themes. They did not stand in for racial progress and simple dignity and the power of our quiet commonalities. Rather, he shrunk them down to kitsch, rendering them -- and him -- recognizable and human in the process. Detailing his mother's loving encouragement back when he stuttered, he recalled her saying, "Joey, it's because you're so bright you can't get the thoughts out quickly enough." That's not the story of America; it's the story of your grandparents.

Similarly, his attacks on John McCain were neither grudging nor high-minded. They were simple. "In the Senate," said Biden, "John has voted with President Bush 95 percent of the time. And that is very hard to believe. And when John McCain proposes $200 billion in new tax breaks for corporate America, $1 billion alone for just eight of the largest companies, but no, none, no relief for 100 million American families, that's not change; that's more of the same." This was not a speech built to inspire, or elevate. It was a message crafted to move polls.

The story concludes that Obama should take a cue from Biden for his speech tonight. I hope that Obama is just himself. That's what got him here.
Posted by Olga at 2:23 PM