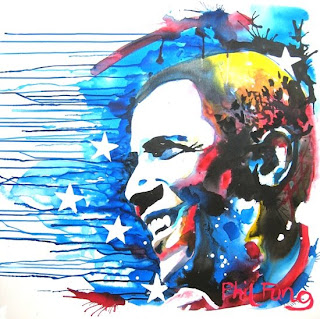 Painting by Phil Fung
Scenes from Denver from the Denver Post

AP: He put finishing touches on his speech Thursday morning, but also found time to shoot some hoops on a basketball court at the Denver Athletic Club.

He also spoke to a luncheon for female Illinois delegates. "I had this speech tonight. I wanted to practice it out on you guys. See if it worked on a friendly audience," Obama joked. He didn't actually give the speech.

"I haven't forgotten where I came from," he added. "It's because of all of you that Michelle and I have this great honor of helping to lead the party and win back this White House."

Aides said his address accepting the Democratic presidential nomination would be a "direct conversation" with Americans on what's at stake and the risks of putting another Republican in the White House.

A look at how the scene at the Mile High stadium is shaping up.
Posted by Olga at 12:52 PM