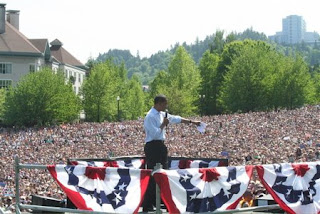 Market Watch: Unfortunately for John McCain's chances, the economy is very weak, and almost everything else is going against him as well, which means Barack Obama will almost certainly be elected president.
That's the view of the overwhelming majority of social scientists who make it their business to peer into the future.
With four months to go until Election Day, the outcome is set in stone, barring some sort of miracle, they say.
The poor state of the economy, the casualties in Iraq, the unpopularity of George W. Bush, the current polling, and Obama's own political skills all point to the election of the Illinois Democrat in November, according to several political scientists, historians and economists who've had a pretty good track record in predicting past elections.
According to their models, it won't be close. Most of them are projecting a 52% to 48% victory for Obama, and that's with assumptions about the economy that are very kind to McCain

Note, there are some wildcards, such as how much will racism play a part in the election. Read the rest of the story, cause it's pretty good.