Obama's Grassroots People One Story at a Time 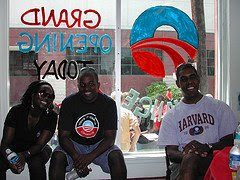 This is not for the right wing of heart.

WaPo: More than 10,000 people applied for slots as "Obama Organizing Fellows" and about 5,500 were interviewed by telephone, answering such questions as "Why Barack?"

This first batch is now finishing a round of voter-registration drives and a series of one-on-one recruiting efforts. Dozens of the Missouri fellows will be offered full-time jobs, paid to spread the word.

"It's one thing building on the next," said Buffy Wicks, Obama's state director here.

When 97 volunteers arrived in St. Louis, Wicks told them her story: a rural California upbringing followed by political activism that intensified when her closest friend was diagnosed with HIV and had no health insurance.

"When he decided to run," she said of Obama, "I said I have to do this because it's for people like Todd.

"It's going to be very hard," Wicks told the volunteers. "It's a lot of long days, a lot of unhealthy days . . . but it's worth it, because we're going to change the country. This for many of you is going to be a transformative experience in your lives. Are you ready for that?"

Wicks and Missouri field director Peachy Myers introduced the group to an 86-page training manual filled with lessons drawn from Obama's experiences as a community organizer and the first 16 months of the presidential campaign. In a national conference call to the volunteers, Obama recalled that when he called his first meeting on Chicago's South Side in the 1980s, no one showed.

"Get ready to have a lot of face-to-face meetings with people who may say yes as well as those who may say no to your ask for commitment," the manual states. "The strength of our campaign has been engaging people that have never been politically active. It is not easy!"

"This summer is all about building capacity," Wicks told the group, explaining that the volunteers would fan out in teams to identify community leaders -- some traditional, some neophytes -- who would "build miniature campaigns in their own neighborhoods."
....

If several people on the ground mention the same problem, the campaign can adjust. Similarly, if one organizer has a good idea, the campaign can quickly pass it along, as happened recently when someone started canvassing at gas stations and discovered that drivers irate about rising prices were motivated to register.

"Now, I'm really jealous of you, because you're going to have a lot of fun. You're going to eat cold pizza, and you're going to drink warm beer," Sen. Claire McCaskill (D-Mo.), a fervent Obama supporter, told the volunteers. "But have fun. That's what he wants you to do. He wants you to learn how to reach out, organize people for power -- the good kind of power, the kind that comes from the bottom up."

McCaskill telegraphed the campaign's central focus: introducing Obama to voters who remain skeptical, and reassuring them.

"The message you've got to send, more than any other message, is that Barack Obama is just like us," McCaskill said.

"If you look at what he has done and how he has done it, anybody who thinks he's out of touch has not paid attention to who he is as a man."

The volunteers now scattered across Missouri are an eclectic bunch. Some have worked in campaigns; most have not. Volunteers in their 20s seem to outnumber all others, but more than a few are in their 40s, 50s and 60s.

One woman described herself as an unemployed single parent from Kansas City looking for bigger solutions. Another said she grew up in the 1960s, granddaughter of a suffragette. A law student raised in a small Missouri town said she was drawn to action after seeing foreign revulsion toward U.S. policy.

Linda Carey, whose children are grown, is a first-timer.

"I've never done anything like this," explained Carey, who said the aftermath of 9/11 and the treatment of terrorism suspects at Guantanamo caused her to take notice. "You go to his Web site, and he immediately invites you to become involved. He invites you to tell your story, and he trusts you to be okay." read more