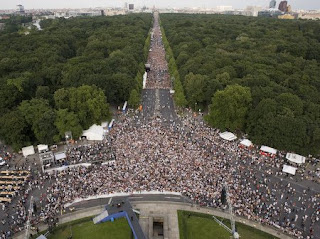 Update: Obama and Sarkozy meet
The view in Berlin

Obama's visit in France, and here on out is expected to be low key.

PARIS, July 25, 2008 (AFP) - US presidential hopeful Barack Obama was due in Paris on Friday to meet President Nicolas Sarkozy during a fleeting and low-key visit in stark contrast to his crowd-pulling trip to Berlin the day before.
Obama's aides did not detail his agenda, but the Illinois senator was expected to land at Le Bourget airport and head into Paris solely for the Sarkozy meeting before leaving for London soon afterwards.
"Senator Obama looks forward to meeting with President Sarkozy and discussing areas of mutual interest, including the common challenges of security, transnational threats, and the global economy," his national security spokeswoman Wendy Morigi said.
"President Sarkozy has made the bilateral Franco-American relationship and the Transatlantic Alliance a centerpiece of his presidency, and Senator Obama looks forward to discussing how to build on these important initiatives."
Public opinion polls in France mirror those elsewhere in Europe to show Obama is by far the candidate most people would like to see succeed President George W. Bush in the November elections.
The election of the rightwing pro-US Sarkozy last year greatly improved US-French relations, which were poisoned by France's staunch opposition to the 2003 US invasion of Iraq under then president Jacques Chirac.