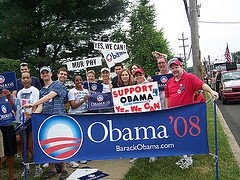 What if Obama said McCain would rather lose the war to win an election?

Bob Herbert: Senator McCain crossed a line that he shouldn’t have this week when he said that Mr. Obama “would rather lose a war in order to win a political campaign.” It was a lousy comment, tantamount to calling Mr. Obama a traitor, and Senator McCain should apologize for it.

But what we’ve learned over the years is that Mr. McCain is one of those guys who never has to pay much of a price for his missteps and foul-ups and bad behavior. Can you imagine the firestorm of outrage and criticism that would have descended on Senator Obama if he had made the kind of factual mistakes that John McCain has repeatedly made in this campaign?

(Or if Senator Obama had had the temerity to even remotely suggest that John McCain would consider being disloyal to his country for political reasons?)

We have a monumental double standard here. Mr. McCain has had trouble in his public comments distinguishing Sunnis from Shiites and had to be corrected in one stunningly embarrassing moment by his good friend Joe Lieberman. He has referred to a Iraq-Pakistan border when the two countries do not share a border.