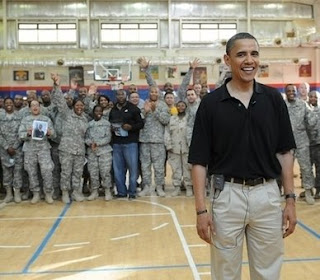 You know, stuff like inspiring people, giving awesome speeches, meeting with foreign leaders, conducting himself in a presidential way -- the nerve of that man!
Bob Herbert says it best:

Let’s see if I’ve got this straight. Barack Obama is a United States senator, a member of the Senate Foreign Relations Committee and his party’s candidate for president of the United States — and yet it was somehow presumptuous of him to meet with foreign leaders last week during his trip to the Middle East and Europe.

I’ll say this about Senator Obama. He sure raises people’s hackles. I’ve never seen anyone so roundly criticized for such grievous offenses as giving excellent speeches and urging people of different backgrounds to take a chance on working together. How dare he? And 200,000 people turned out to hear him in Berlin. Unforgivable.

The man has been taken to task for promoting hope, threatened with mutilation by Jesse Jackson for suggesting that a lot of black fathers could do better by their kids and had his patriotism called into question because he wants to wind down a war that most Americans would dearly love to be rid of.

John McCain can barely stop himself from sputtering at the mere mention of Senator Obama’s name. He actually ran an ad blaming Mr. Obama for high gasoline prices. Even Republicans had a good laugh at that one.

And yet Mr. Obama continues to treat Senator McCain respectfully. As far as personal character is concerned, Mr. Obama has scored very well, indeed. read the rest cause it's good.

I have a theory about the Obama hate syndrome -- I'll post on that some other time.
Herbert also says that Obama's economic offense, key to winning, is coming. If the past two days are any indication, I'd say Obama will lay out the details in the coming days:

The word is that an economic offensive may finally be coming from the Obama campaign.

Anna Burger, the secretary-treasurer of the Service Employees International Union, was part of a wide-ranging group of advisers on economic issues who met with Mr. Obama in Washington on Monday. “He has very serious policies, not sound bites, for addressing the long-term and short-term issues that are having such a dramatic effect on people who are working and trying to make ends meet,” she said.

Translating those ideas into a compelling economic narrative for his campaign — something Mr. Obama has not yet done — is the key to defeating John McCain.