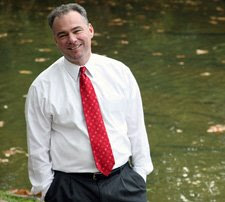 Update 7-29: CNN throws in it's two cents.
So does Newsweek.
What Tim Kaine, the harmonica-playing, bilingual governor, has to say about Obama.
Also, all these mumblings that Obama needs a military veep, what's to stop Obama from announcing cabinet members, which include military types? Maybe he'll announce his vice president and.... Obama may not have military experience but he's strong on foreign policy (never mind what the media says), so I suspect his veep won't necessarily have military experience either.

Politico: As Senator Barack Obama turns to the choice of his running mate, Virginia Gov. Tim Kaine has emerged as one of the campaign’s potential finalists, sources familiar with conversations in Richmond and in Chicago said.

Kaine, an early Obama supporter whose biography nicely dovetails with the Illinois senator’s, "ranks very, very high on the short list," said a source who has spoken recently to senior Obama aides about Kaine.

Kaine "is getting a critical examination," the source said.

The 50-year-old Virginia governor is among a handful of logical, and much-discussed, choices to join Obama on the campaign trail. Kansas Gov. Kathleen Sebelius, former Georgia Sen. Sam Nunn and Delaware Senator Joe Biden are among others frequently mentioned.

Obama and his top advisers met Monday afternoon at the Washington, D.C., law office of Eric Holder, one of the leaders of his vice presidential vetting team.

Virginia Gov. Timothy M. Kaine has told close associates that he has had "very serious" conversations with Sen. Barack Obama about joining the Democratic presidential ticket and has provided documents to the campaign as it combs through his background, according to several sources close to Kaine.

Obama has revealed little about which way he is leaning. And despite rising anticipation that a decision is imminent, campaign officials said an announcement is likely in mid-August, shortly before the Democratic National Convention. Obama's top aides, David Plouffe and David Axelrod, huddled yesterday in the Washington office of Eric Holder, who along with Caroline Kennedy is vetting potential running mates.

Although rumors have circulated about former military leaders and other nontraditional contenders, including Republicans, Obama's pool of prospects is heavy on longtime senators with foreign policy experience. Kaine and Kansas Gov. Kathleen Sebelius are the only state leaders believed to be under serious consideration, sources close to Obama said.