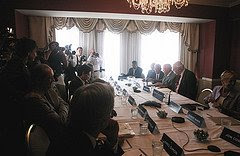 Yesterday's economic meeting
It's 98 days before the election and I highly doubt Obama will squeeze in that week off he talked about. The man must be running on adrenaline.
Obama is also demonstrating his presidential style. He gathers information from the brightest minds, even dissenting opinions, and he puts it together to shape policy.

Obama, putting a heavy focus on the economy following his trip aboard, kept the conferences a surprise until this morning.

Showing the Democrat's soaring stature, a foreign leader's visit to Washington is starting to mean a sit-down with Obama. This afternoon, Obama will meet with Yousuf Raza Gilliani, the Prime Minister of Pakistan.

This evening, Obama will speak at the Democratic House Caucus meeting this evening.

Obama is eager to show himself hard at work on domestic issues after an overseas voyage that reaped an international media bonanza but has had an unclear impact on polls back home.

What does McCain know about finances?
Posted by Olga at 8:59 AM