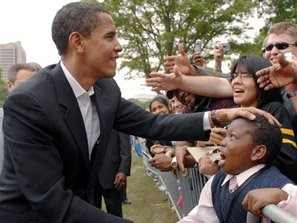 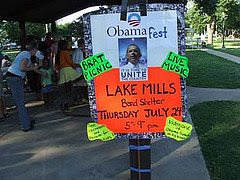 Karl Rove sets the tone and the right wing media goes tweet, tweet. Here's more media tweets and if you read the comments you'll see a lot of people have taken the bait.

Salon: This is exactly what happens every single election cycle. The Right spews some petty, personality-based attack, and the chirping media birds then mindlessly repeat it until it's lodged into our discourse as accepted fact. That's the media strategy on which the Right is relying to win the election this year again -- dictating the songs sung by the vapid, chirping press birds -- even as they petulantly and incessantly complain that the same media stars who serve this strategy are stacked against them. Yesterday's, National Review's Rich Lowry posted what he called "musings from a shrewd friend" about a Dana Milbank column in yesterday's Washington Post that repeated every last "Obama-is-arrogant" cliché ("there are signs that the Obama campaign's arrogance has begun to anger reporters"). Lowry's "shrewd" friend:
[Obama's] showing hubris and contempt for the rest of us in how he considers America fundamentally broken and he's the solution. Messianism is usually a quality you don't want in a president. This was always the soft underbelly of his candidacy. They've gotten too caught up in their own story. What always does in a celebrity? Overexposure. The question now is whether Dana Milbank is the bird leaving the wire and every other bird in the press follows him or not. If this narrative sets in, Obama might have to move up his VP announcement to change the story.
Actually, Milbank wasn't pioneering anything. He was just doing what Beltway reporters do -- repeating what he's been hearing as standard conventional Beltway media wisdom handed down from Rovian/McCain operatives: Obama is an arrogant, presumptuous elitist. The birds who led the flock are Karl Rove, Steve Schmidt and comrades. Milbank was just one of the many birds "leaving the wire" and following along.

.....
This is what happens over and over and over. Media stars love to be used this way. The themes never change and neither does the process. Still, it's amazing how fast it travels from Karl Rove's lips and then out of the mouths of the vast bulk of "journalists" covering the presidential race for establishment media outlets. As Gloria Borger of CNN and U.S. News & World Report said: "when Rove speaks, the political class pays attention -- usually with good reason."
The fact that they all say the same thing at once ("up next: Is Obama arrogant?" -- "Obama's arrogance can hurt him" -- "Obama is striking many as arrogant and presumptuous" -- "Obama needs to be careful not to appear too arrogant") doesn't strike any of them as evidence that they're mindless, manipulated spouters of conventional wisdom. They actually think it proves the opposite -- that it's evidence that they are political sophisticates plugged into the important election themes ("Obama is arrogant and presumptuous").