Obama Veeps Down to Six Choices 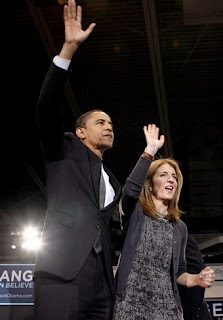 And Caroline Kennedy, who has been shaping that shortlist, intends to stay on with Obama after her work vetting vice presidential candidates. The once private Kennedy has now been inspired into a political career.

WSJ: Ms. Kennedy and former Justice Department official Eric Holder, co-heads of the search committee, recently completed extensive meetings with Democratic lawmakers and others to discuss possible vice-presidential candidates. They have helped Sen. Obama to winnow the list of potential running mates to about a half dozen, campaign officials say. (Please see related article on Page 10.)

Ms. Kennedy and her team are no longer seeking input from outsiders; they are now working closely with Sen. Obama as he moves toward making his choice. And they don't discuss the selection process on the phone, because Sen. Obama is "never alone, even in the car, now," says one campaign aide.

The committee has tried hard to keep its deliberations secret. Ms. Kennedy declined to be interviewed. Many of the people with whom she's met won't talk about the substance of the conversations.

When the search process draws to a close, Ms. Kennedy will continue working on Sen. Obama's behalf, campaign officials say. Her increasing visibility in the campaign has sparked speculation that Ms. Kennedy, who strived for years to avoid the limelight, may have a political future of her own.
.....

When the presidential race got rolling last year, Ms. Kennedy began taking her children to events -- for both Sen. Obama and Sen. Hillary Clinton. Ms. Kennedy and Sen. Clinton were on friendly terms, according to one Clinton campaign aide. Ms. Kennedy wasn't expected to weigh in during the primary contests.

But her children expressed a strong preference for Sen. Obama, which had an impact, according to several of her friends. Her elder daughter was in college, her second daughter was in her last year of high school, and her son was a few years younger. "The timing was perfect for her to get more involved," says one of those friends. "And her children inspired her." Read the whole thing -- it's interesting.