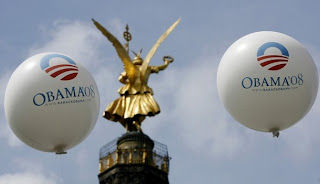 You might not have to buy a ticket to go to the convention. This is exciting.

Politico: "We're going to ask those 80,000 people in that stadium to march out of there and go with very specific instructions and goals to register millions of new voters," Hildebrand said.

The campaign announced July 7 that it would hold the final night of the Aug. 25-28 convention at Invesco Field and open Obama's acceptance speech to thousands of spectators. Official details of the so-called community credential process are expected early next week, the campaign said.

By seating the 6,000 delegates down on the field normally defended by the Denver Broncos, and by keeping the number of journalists, technicians and VIPs at the same level as those attending the Pepsi Center events earlier in the week, the campaign could bring in more than 60,000 members of the public, Hildebrand said.

Sign up here to get an email when the news is out.
Posted by Olga at 3:03 AM