Obama Ahead in Montana 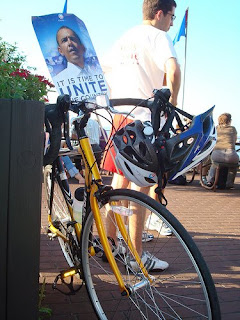 Montana only has 3 electoral votes but every one counts and this is an interesting story:

WSJ: As late as this spring, the electorate seemed headed in the same direction. A pair of statewide polls showed that Sen. John McCain, the presumptive Republican nominee, held a comfortable lead over Sen. Barack Obama. But after four visits by Sen. Obama, an aggressive media campaign and some well-organized ground work, the Illinois Democrat now leads by five points, according to a July 1 Rasmussen poll. The campaign says it is opening six offices in the state this month.

The reason for his surge lies in part with the migration of Democrat-leaning, college-educated transplants like Mr. Walseth and his wife, Elizabeth Darrow. As the rural Republican eastern plains lose population and political influence, thousands of blue-staters who began arriving here in the 1990s are reaching a critical mass. The effect is that Bozeman and several other larger towns in western Montana have become political battlegrounds.

"It's a much different place from the Montana I found when I first arrived," says Mr. Walseth, a boyish 50-year-old who favors T-shirts over ties and says he plans to vote for Sen. Obama.

Gene Fields, a 72-year-old retired cowboy who favors 10-gallon hats and Sen. McCain, says, "People come here and they want it to be like where they came from. I say, why don't they stay there? The bad thing is, now they've got you outnumbered, you put an issue to a vote and they'll outvote you."