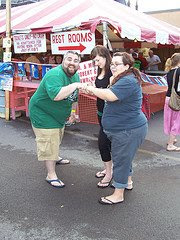 A couple of Obama supporters
It's so amazing to me that a presidential candidate actually shows he's competent and now all the self-professed experts (lowly journalists) are smacking at Obama like he's a pinata. Anyone who claims that the media is in Obama's boat is not paying attention. That's what the republicans are pushing.
Obama has had to do all the proving.
Here's a sampling of some of the finest Obama bashing of the day:
Obama is far from perfect, courtesy of New York magazine.
Obama's Woman problem, courtesy of Dick Morris. (funny, Obama is polling way ahead of McCain)
Obama the presumptuous nominee, courtesy of Dana Milbank, Wapo.
The argument that Obama is presumptuous is insanity.
The thing is, republicans are scared out of their wits. They have no other way to attack Obama because McCain is such a weak candidate, so they attack Obama for being presidential. Oh, the irony of it all. Bob Herbert talks about this in his column. It's a must read.
At the end of the day, unless Americans have gone completely batty, Obama is going to win and he's going to win big.
What these pundits don't realize is that there is this widespread grassroots movement that is quietly working behind the scenes, signing up voters each and every day. There are people meeting in coffee shops and living rooms talking about issues and policy.
Obama this morning in Missouri
Posted by Olga at 9:52 AM