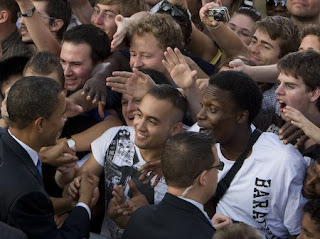 Obama in France, AFP
The Obama road blog with photos/video
He's now off to London and then home.

AFP: The Democratic White House hopeful effusively praised the rightwing French leader at a joint news conference at the Elysee Palace, despite perceptions that an affinity for France can damage US presidential candidates.

"He has been a great leader on this, and the American people greatly appreciate President Sarkozy's approach to the relationship," Obama said, on the penultimate day of a Europe and Middle East campaign tour.

"I think the average American has enormous fondness for the French people," said Obama, despite recent rows, especially over staunch French opposition to the US-led invasion of Iraq in 2003.

Sarkozy returned the compliment, and joked about the fact that both he and Obama were the sons of immigrants to their respective countries.

NYT: “The America the France loves is an America that’s far-sighted, that has ambitions, great debates, strong personalities,” Mr. Sarkozy told Mr. Obama as their joint news conference began. “We need an America that is present, not absent. We need friends who are independent but who are true friends. And you have to know that here in Europe, here in France, we’re watching with great interest what you’re doing.”

As Mr. Obama’s weeklong trip overseas winds down, the late-afternoon press conference with Mr. Sarkozy was the first one that he held standing next to a world leader. He deflected questions from French reporters who asked him to comment upon Mr. Bush and other policies of the United States that are controversial here.

“Let me just remind everyone that I’m not the president. I’m a United States senator. I’m a candidate for president,” Mr. Obama said. “There’s a wonderful tradition that’s not always observed, but I think it’s a good one. You don’t spend time criticizing a president of the United States when you are overseas.”