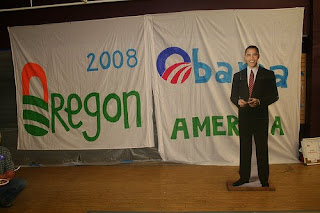 Obama, who just arrived back in town last night, spoke today at the minority journalists conference:

Swamp: "We are becoming a more diverse culture, and it's something that has to be acknowledged," he said. "I've also said that affirmative action is not going to be the long-term solution to the problems of race in American because, frankly, if you've got 50 percent of African-American or Latino kids dropping out of high school, it doesn't really matter what you do in terms of affirmative action. Those kids are not getting into college....There have been times where affirmative action has been viewed as a shortcut to solving some of these broader, long-term, structural problems."

Obama said minority children who come from wealthy homes should not be given greater consideration for college, for example, than "a poor white kid who has struggled more."

He also expressed reservations about making reparations to African Americans and other groups for past deeds. "The best reparations we can provide are good schools in the inner city and jobs for people that are unemployed," Obama said.

Obama was also asked whether in his repeated efforts to denounce false rumors that he is a Muslim he has gone too far, thus hurting impressions of Muslim Americans, including some who believe he should visit a mosque, as he has done with churches and synagogues.

"This is a classic example of a no win situation, right?," he responded. "So, I try to correct something that is false, and then people say, well why are you correcting this thing in a way that isn't sufficiently, ah, well, let me put it this way: first of all, I have repeatedly on various occasions said, I am not a Muslim, but this whole strategy of suggesting that I am is indicative of anti-Muslim sentiment that we have to fight against. So, maybe you haven't see those quotes, but they're out there and I have said them on more than one occasion....I just don't like the idea of somebody falsely identifying my religion...If you were a Muslim and somebody consistently said that you were a Christian, I suspect that you would want to have that corrected because that's offensive to your faith. I think my credentials on supporting Muslim Americans are very strong."