Looking To West Virginia and Beyond 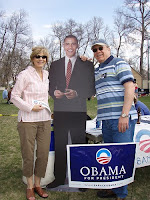 montanans make due with an obama cut-out.

in west virginia, obama's chances of winning are like a snowball's in hell. west virginia is like pennsylvania and ohio combined. voting for a black person in west virginia goes against that state's cultural grain. it will go to the republicans in the general election.

but there are people working their tails off on behalf of obama.

the second poll for west virginia is out since march, when hillary's lead was 28. the latest poll shows hillary with a 29 point lead.

west virginia has 26 delegates at stake and its primary is may 13.

after west virginia is kentucky and oregon on may 20. kentucky has 47 delegates and oregon has 48. kentucky will likely be like west virgina, pennsylvania and ohio combined. but hopefully obama will score a win in progressive oregon.

they will be followed up by montana and south dakota june 3 and finally, the puerto rico caucus june 7.


then that's all folks. it will be in the hands of the superdelegates, if hillary hasn't exited.
No Way, No How Can Hillary Win
Hillary’s Impossible Chances of Winning
It’s Still Over for Hillary
The Clintons’ Fraud Case
No Way, No How Can McCain Win
The Incredible Shrinking Republicans
Posted by Olga at 4:10 PM