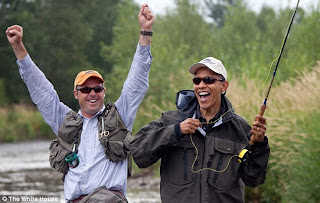 Obama enjoying a day of fishing in Montana
March 11:
Here's another update to this story from the Obama administration--there WILL BE NO BAN on FISHING:

National Oceanic and Atmospheric Administration chief Jane Lubchenco told a House panel yesterday that her agency had no plans to halt fishing. And National Marine Fisheries Service chief Eric Schwaab released a statement last night saying NOAA "is committed to adopting policies that will ensure that current and future generations have the opportunity to enjoy the great tradition of recreational fishing." NYT

If that's not clear enough:

Contrary to popular rumor, Obama is not banning fishing. The rumor was started by an ESPN blogger:

The Obama administration has ended public input for a federal strategy that could prohibit U.S. citizens from fishing some of the nation's oceans, coastal areas, Great Lakes, and even inland waters.

ESPN's editor has since said the blog was in error:

Firestorms get started in a variety of ways, especially on politicized issues.

ESPNOutdoors.com inadvertently contributed to a flare-up Tuesday when we posted the latest article in a series of stories on President Barack Obama's newly created Ocean Policy Task Force, a column written by Robert Montgomery, a conservation writer for BASS since 1985. Regrettably, we made several errors in the editing and presentation of this installment. Though our series has included numerous news stories on the topic, this was not one of them -- it was an opinion piece, and should have been clearly labeled as commentary.

And while our series overall has examined several sides of the topic, this particular column was not properly balanced and failed to represent contrary points of view. We have reached out to people on every side of the issue and reported their points of view -- if they chose to respond -- throughout the series, but failed to do so in this specific column.

People WANT to believe Obama's banning fishing so they can be outraged and boy are they outraged. Just search "obama bans fishing." Some folks, such as Glenn Beck, who apparently rambled about this today, don't have anything else better to do. Beck is such an arse. Read more about the White House Ocean Policy Task Force here. In a 2008 interview with Sport Fishing magazine, this was Obama's stance:

Obama: My administration would place the emphasis in fishery management where it belongs: in ensuring the long-term health and sustainability of stocks through the use of effective and appropriate conservation measures. Such an approach would not provide a preference for one management tool, such as a marine reserve, over another. Given sufficient management controls and data, a fishery can meet conservation objectives through a variety of catch controls and habitat-protection measures, including gear restrictions, bag limits or closures. In some cases, additional conservation measures may need to be taken to ensure a positive recreational marine-fishing experience for future generations of Americans. Recreational fishermen have not shirked from embracing such measures when needed to achieve long-term stock sustainability, as long as measures are matched to the problem. While marine reserves may be an effective means of achieving important goals, their use and design must be based on an assessment of impacts and balanced by a strong respect for the ability of recreational anglers to practice their sport. In my view, we need to be open to the use of a variety of innovative conservation tools and be prepared to use them if the science justifies their establishment, and if it has been determined that less-restrictive options will not achieve critical goals like rebuilding fish stocks. The decision to establish marine reserves should be made as a result of a transparent, science-based process and be the least intrusive possible to get the job done. Such a process should include outreach to the sport-fishing community to explain both the scientific basis for the action and the expected conservation benefits to future fishing generations if it is to gain the community's active support. Read the whole interview here.

Obama's plan to restore the Great Lakes, so that they are fishable:
Posted by Olga at 6:04 PM