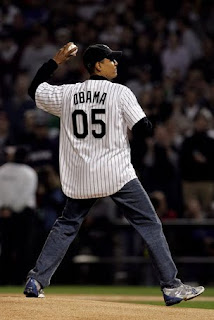 President of the United States Barack Obama will throw the ceremonial first pitch at Nationals Park in Washington D.C. prior to the 2010 season opener between the Washington Nationals and the defending National League Champion Philadelphia Phillies on Monday, April 5 at 1:05 p.m.

"Opening Day of the baseball season is a special event for our country and its importance has been reinforced by the 100-year history of Presidential participation," said Baseball Commissioner Allan H. (Bud) Selig, who will be in attendance for the historic First Pitch. "I am proud that President Obama will continue the long Presidential tradition of throwing out the first pitch of Opening Day in Washington D.C." Washington Nationals

The President and First Lady have announced that this year’s White House Easter Egg Roll will be held on Monday, April 5, 2010 with the theme of “Ready, Set, Go!” promoting health and wellness. The event will feature live music, sports courts, cooking stations, storytelling and, of course, Easter egg rolling. All of the activities will encourage children to lead healthy and active lives and follow the First Lady’s ‘Let’s Move!’ initiative, a national campaign to combat childhood obesity. The White House will open its South Lawn for children aged 12 years and younger and their families. Full ticketing information is below. We hope to see you at the White House! More at WH