Republicans Hold a Press Conference Today to Near Empty Room

AP photo of Mike Pence and Cathy McMorris Rodgers discussing health legislation at a press conference today. By the way, health reform is now law. This is what John Boehner tweeted:

With the stroke of a pen, President Obama has signed away another share of Americans' freedom. We will take it back.

Such grownups. As Obama signed health reform, Newt Gingrich's tweet links to a site that shows a photo of Obama, Pelosi and Reid and Armageddon. This morning, he accused Obama as being part of the Chicago mob. Michael Steele says that Pelosi needs to be fired. Fox News had this to say:

Mark this day: Everyone agrees with Joe Biden. What did he say to president at health insurance bill signing? "This is a big f---ing deal.”

To which Gibbs tweets back:

When are the republicans going to grow up? Either grow up or get out. 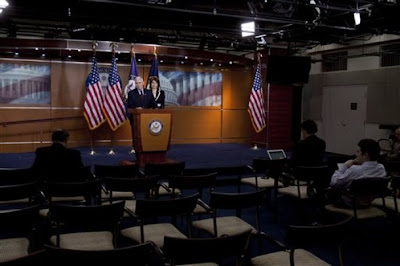 Here's the actual press conference, where Pence announces republicans are going to continue to waste our tax dollars by doing nothing but opposing and stamping their feet. Remember Waterloo?