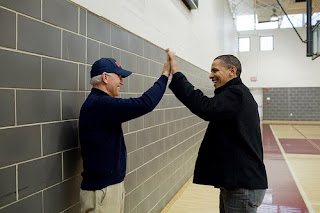 UPDATE April 1: See the video here.
Obama will speak at 3:25 pm eastern on health insurance reform at the Portland Expo. Hundreds waited in line for tickets today and people are actually excited. Imagine that! The event will be live audio streamed at WhiteHouse.gov. There's also likely to be a stream at msnbc.com. It will also be live streamed locally at WCSH6.com or WLBZ2.com.
Obama will then fly to Boston where he'll speak at a DNC reception at 6:05 pm eastern and a fundraiser at 8:05 pm eastern. Expect Obama to rally the democrats to keep the momentum going.
Posted by Olga at 6:14 PM