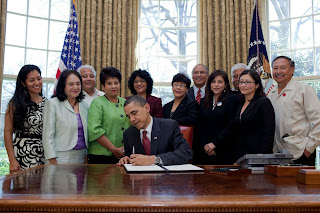 Obama with the Chavez family

The rights and benefits working Americans enjoy today were not easily gained; they had to be won. It took generations of courageous men and women, fighting to secure decent working conditions, organizing to demand fair pay, and sometimes risking their lives. Some, like Cesar Estrada Chavez, made it the cause of their lives. Today, on what would have been his 83rd birthday, we celebrate Cesar's legacy and the progress achieved by all who stood alongside him.

Raised by a family of migrant farm workers, Cesar Chavez spent his youth moving across the American Southwest, working in fields and vineyards, and experiencing firsthand the hardships he would later crusade to abolish. At the time, farm workers were deeply impoverished and frequently exploited, exposed to very hazardous working conditions, and often denied clean drinking water, toilets, and other basic necessities. The union Cesar later founded with Dolores Huerta, the United Farm Workers of America (UFW), still addresses these issues today.

After serving in the United States Navy, Cesar Chavez became a community organizer and began his lifelong campaign for civil rights and social justice. Applying the principles of nonviolence, he empowered countless laborers, building a movement that grew into the UFW. He led workers in marches, strikes, and boycotts, focusing our Nation's attention on their plight and using the power of picket lines to win union contracts.

"The love for justice that is in us is not only the best part of our being, but it is also the most true to our nature," Cesar Chavez once said. Since our Nation's earliest days of independence, we have struggled to perfect the ideals of equal justice and opportunity enshrined in our founding documents. As Cesar suggests, justice may be true to our nature, but as history teaches us, it will not prevail unless we defend its cause.

Few Americans have led this charge so tirelessly, and for so many, as Cesar Chavez. To this day, his rallying cry -- "Sí, se puede," or "Yes, we can," -- inspires hope and a spirit of possibility in people around the world. His movement strengthened our country, and his vision lives on in the organizers and social entrepreneurs who still empower their neighbors to improve their communities.

NOW, THEREFORE, I, BARACK OBAMA, President of the United States of America, by virtue of the authority vested in me by the Constitution and the laws of the United States, do hereby proclaim March 31, 2010, as Cesar Chavez Day. I call upon all Americans to observe this day with appropriate service, community, and education programs to honor Cesar Chavez's enduring legacy.

IN WITNESS WHEREOF, I have hereunto set my hand this thirty-first day of March, in the year of our Lord two thousand ten, and of the Independence of the United States of America the two hundred and thirty-fourth.

Obama also issued a statement on the standard bearer of teachers:

"I was saddened to hear about the passing of Jaime Escalante today. While most of us got to know him through the movie that depicted his work teaching inner-city students calculus, the students whose lives he changed remain the true testament to his life’s work. Throughout his career Jaime opened the doors of success and higher education for his students one by one, and proved that where a person came from did not have to determine how far they could go. He instilled knowledge in his students, but more importantly he helped them find the passion and the will to fulfill their potential. Jaime’s story became famous. But he represented countless, valiant teachers throughout our country whose great works are known only to the young people whose lives they change. Michelle and I offer our condolences to Jaime’s family, and to all those who knew him and whose lives he touched."