Gibbs On Netanyahu and Obama Meeting 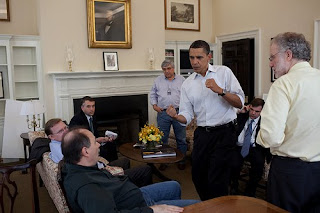 Here are some nuggets from Robert Gibbs press briefing via Politico:

Gibbs says Netanyahu and Obama spoke for two hours total -- in two meetings -- and that they had an "honest and straightforward discussion about our relationship, about regional security and about comprehensive peace efforts." Gibbs declines to discuss the substance of the talks but says Obama asked Netanyahu "to take steps to build confidence for proximity talks so that progress can be made toward comprehensive Middle East peace."

On START, which will be signed in Prague:

Gibbs says the White House is "very close" to an agreement on an arms treaty with Russia.

Moving to financial regulatory reform, Gibbs says legislation will be finished "in the next couple of months" and that it is "one of the president's top priorities."

Answering a question from Lester, a WND writer (WND is a birther publication):

Asked what Obama plans to do for Democrats who voted for "Obamacare," Gibbs says he doesn't "have a political schedule in front of me," before asking the reporter, Lester Kinsolving, if his terminology was "Internet vernacular" or the name of the bill. "I was a little confused," he says.

Gibbs's response to the GOP call for repealing health care reform is: "If the message that Republicans want to take into a midterm election or in a presidential campaign in 2012 is, 'We want to take tax cuts away from small businesses that, they get help in providing health care to employees,' " along with other benefits, "that sounds like a heck of a good time."