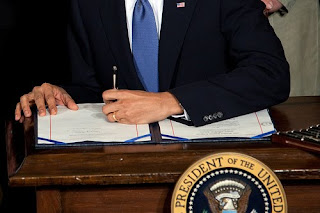 Here is a compilation of what the law does. I'll add more when I find good sources of information:
This year, these changes will go into effect:

This year, children with pre-existing conditions can no longer be denied health insurance coverage. Once the new health insurance exchanges begin in the coming years, pre-existing condition discrimination will become a thing of the past for everyone.
This year, health care plans will allow young people to remain on their parents' insurance policy up until their 26th birthday.
This year, insurance companies will be banned from dropping people from coverage when they get sick, and they will be banned from implementing lifetime caps on coverage. This year, restrictive annual limits on coverage will be banned for certain plans. Under health insurance reform, Americans will be ensured access to the care they need.
This year, adults who are uninsured because of pre-existing conditions will have access to affordable insurance through a temporary subsidized high-risk pool.
In the next fiscal year, the bill increases funding for community health centers, so they can treat nearly double the number of patients over the next five years.
This year, we'll also establish an independent commission to advise on how best to build the health care workforce and increase the number of nurses, doctors and other professionals to meet our country's needs. Going forward, we will provide $1.5 billion in funding to support the next generation of doctors, nurses and other primary care practitioners -- on top of a $500 million investment from the American Recovery and Reinvestment Act. More at the WH

The NYT has a great interactive on how different people (married, single, uninsured...) will be affected under the new law.
Starting in 2014, there will be a fine for not having healthcare insurance. Currently, we all pay a large fine. That's because our tax dollars pay for the people who don't have insurance (see video below). The Kaiser Family Foundation is a terrific source of nonpartisan healthcare news.
What is the fine for not having insurance?

How much will it cost to buy if you don't have insurance?

If you decide to buy your own plan, you will be able to purchase it through a new state-based exchange that should start up in 2014. These plans will be sold at four levels of richness, ranging from a bronze plan that covers 60% of the benefit costs to a platinum plan that covers 90%. These plans will all cover the essential health benefits, a package that is supposed to include maternity, hospital and prescription coverage, among other areas. They will also have out-of-pocket costs capped at a level tied to health-savings account plans, which this year is $5,950 for an individual and $11,900 for a family.

There will also be a catastrophic plan available to people under 30 and those exempt from the insurance mandate.

Depending on your income level, you may be eligible for government help buying a plan. Under both the Senate bill and the reconciliation package, Medicaid will expand to cover people under 133% of the federal poverty level and under the age of 65, which is about $29,000.

For those making between 133% and 400% of poverty, which is around 88,000 for a family of four, there will be subsidies to help pay premiums and cover cost-sharing expenses. The credits will be designed so that the amount people pay toward premiums is capped at a certain percentage of their income. In the underlying Senate bill, this ranges from 2% for those at the poverty level, to 9.8% for those between 300 and 400%. Under the House's reconciliation package, the subsidies are a bit richer, with the contributions capped at 9.5% of income for those between 300 and 400% of poverty. Read more at the WSJ.